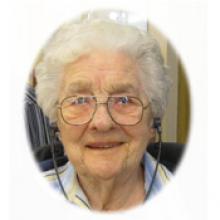 ELIZABETH M. (BETTY) CRAIG (nee GRAY) Elizabeth Mary Craig, born a triplet on April 26, 1912 on the farm near Pope, MB passed away in Swan River on October 17, 2012 in her 101st year. Of the triplets only she and her sister Daisy survived which in itself was a miracle as they were both under two pounds at birth. Betty, as she was known, was predeceased by her parents, George and Polly Gray, her husband Alex, infant son John, her sisters Daisy (Walter) Govenlock, Florence (Hector) Calder, brother Clifford (Jean) Gray, and is survived by her sons George and Jim, daughter-in-law Marilyn, grandsons Cale and Troy (Val), granddaughter Nadine (Kevin) Gates, and seven great-grandchildren Korah, Alexandra, Mackenzie, Matthew, Hayden, Anyssa and Kaylin. Betty and Alex were married in 1939 and started life together in Morden, MB. They subsequently moved to Portage la Prairie and resided there until 1959 when they moved to Swan River where they opened the Swan Valley Florist. A cottage at Benito Beach, Madge Lake, SK was their pride and joy and after Alex's untimely death in an auto accident Betty spent many happy days there. Ultimately she and son George closed the florist shop and moved into the Swan Valley Lions Manor. Failing health in the last few years necessitated a move to the Swan Valley Personal Care Home but she maintained her sense of humour and was always ready with a quip or humorous retort. The family want to express their heartfelt appreciation to the staff at the Personal Care Home for their excellent care. Cremation has taken place and at her request a simple graveside service was held on Monday, October 22. In lieu of flowers, donations may be made in memory of Betty to the charity of one's choice. Paull Funeral Home Crematorium, Swan River in care of arrangements.