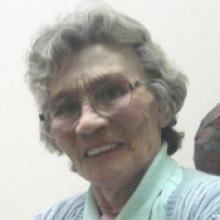 VIOLA DORIS PARKER (nee ANDERSON) Vi Parker passed away peacefully in her home at Fairview Home in Brandon, Friday, March 8, 2013 at the age of 77, with her family by her side. Dearly loved and supported by family, she never forgot those she loved. Born in South Indian Lake, MB in 1936, she was the second oldest of nine children. She is predeceased by her brother Bill, sisters Harriet and Alice, son Jackie and her husband Corky. At the age of 15, she moved to The Pas to go to school where she also worked until she met and married her husband, Corky Parker at the age of 18. She lived most of her married life in The Pas and later lived in Brandon until her passing. She had six children, Edith Coutu (David), Kathleen Bruederlin (Bruno), Kim Parker (Kathy), Jackie (deceased), Kelly Parker, and Arla Parker (Guy). Her pride and joy were her six grandchildren Claire and Aimee Coutu, Heather and Sarah Bruederlin, Caitlin Parker, and Devon Lipscombe. She lived a full life with the people she loved, the things she liked to do, as well as her travelling. She never sat still for long and was always busy with something. She was generous with her time and caring. She loved nothing more than having her friends and family stop in for a visit. Right until the end she made everyone feel like they counted despite her own limitations. She loved to travel to Argentina, Venezuela, Hawaii, all across Northern Canada and Western Canada to name just a few places. It was the north that she loved best of all though, spending many summers travelling throughout. She was deeply loved by everyone who had the privilege of knowing her and will be sadly missed. A lovely service celebrating her life was held at Brockie Donovan Funeral Home in Brandon with Reverend Craig Miller presiding on March 14, 2013 and interment was held at South Indian Lake on March 16, 2013. We would like to give a generous thank you to all the staff at Fairview Home, her doctors, as well, as the staff at the hospital for their many kindnesses. Donations in her memory may be made to the Alzheimer Society of Manitoba, 4B-457-9th Street, Brandon, MB, R7A 1K2. Messages of condolence may be placed at www.brockiedonovan.com. Arrangements were in care of Brockie Donovan Funeral Cremation Services, Brandon, (204) 727-0694.