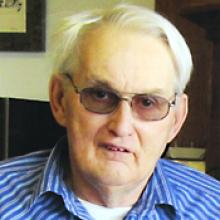 GEORGE SAMUEL MANASTYR George Samuel Manastyr of Brandon, Manitoba passed away peacefully at Dinsdale Personal Care Home on Tuesday, July 9, 2013. George was born in Geraldton, Ontario on June 18, 1941; moved with the family to Winnipeg then Riverton and finally, back to Winnipeg. A year or so later, George decided to move to Simcoe, Ontario to work for a few years. He came back home to Winnipeg in 1971, shortly after the passing of his father. Before moving to Brandon in 2003, George lived in Winnipeg and worked at Motor Coach Industries Ltd. as a Team Leader on the assembly line. George enjoyed his work, loved puttering around in the garden, and family gatherings, especially those that came together with a good game of cards. He always had a kind word and was willing to help anyone in need. He had a special fondness for family pets with the most recent being his cat Snickers, who was adopted into the loving family of one of his cousins upon his move to personal care. George was predeceased by his father, Maxwell and his mother, Kathleen. He is survived by his sisters Donalda (Walter Bonkowski) and Joan (Robert Yanchycki), his nephews and nieces: Wesley Bonkowski (Jacquie), Teresa Dillabough (Mike), Trevor Bonkowski (Marilyn), Erin Yanchycki (Bonnie), Phillip Yanchycki (Tania), Joshua Yanchycki (Jaclyn), Janna Lenius (Dennis) and all his great-nephews and nieces. A celebration of George's life will be held at Grace Lutheran Church, 3101 Victoria Avenue in Brandon, Manitoba on Monday, July 15, 2013 at 2:00 p.m. with Rev. Edmund Mielke officiating. Urn placement will follow in the Brandon Cemetery Columbarium. In lieu of flowers, donations in memory of George may be made to the Heart and Stroke Foundation, Unit 3-824-18th Street, Brandon, MB, R7A 5B7 or Grace Lutheran Church,3101 Victoria Avenue, Brandon, MB, R7B 3P3. Messages of condolence may be placed at www.brockiedonovan.com. Arrangements are in care of Brockie Donovan Funeral & Cremation Services, Brandon, 204-727-0694.