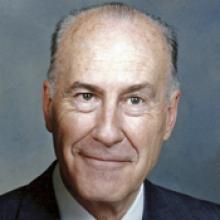 FRANK (ROSS) SCRASE Dearly loved and loving husband of Joan, died suddenly on July 20, 2013 at Brandon, MB, following a lengthy struggle with Alzheimer's disease. Ross was born in Kenville, MB on October 23, 1931 to Ted and Melba Scrase. He attended school in Kenville, finishing high school in Dauphin. He went on to the University of Manitoba, graduating in Civil Engineering in 1955. He worked for CN Railway in southern ON, returning to Manitoba in 1958 to work with The Department of Highways. In Winnipeg he met his best friend, Joan Darbey, and married her on April 8, 1961 at All Saints Anglican Church. Together, they moved on to The Pas, Portage la Prairie and Brandon. He retired in 1996 as the Regional Director of Highways for Southwestern Manitoba after 38 years of dedicated service. Ross took great pride in his career, working with integrity and professionalism. Ross loved to travel, taking his family on many vacations by car from coast to coast across Canada and the United States, often catching a baseball or hockey game on the way. In retirement, Ross and Joan enjoyed extensive travel through Europe. Ross was actively involved in his Church Community, serving on vestry, as Rector's Warden, and synod delegate at All Saints Winnipeg, Christ Church The Pas, St. Mary's Portage, and St. Matthew's Brandon. Ross loved his children. Many hours were spent playing with them and supporting them in all their endeavours. His grandchildren were special to him and gave him the opportunity to play again. Ross will be missed by Joan, daughters Jacqueline Woodcock (Bruce) and Nicolas, Innisfil, ON, Kerry Scrase, Dallas, TX, son Michael Scrase (Rachelle) and Sarah and Ethan, Red Deer, AB, sister Gwen Fletcher, Sidney, BC, brother-in-law Wilmar Wikjord, Medicine Hat, AB and sister-in-law Diane Jinks (David), Pender Island, BC. He has passed from our loving hands into the loving hands of God. He was predeceased by his sister Corrine Wikjord and brother-in-law Bert Fletcher. The family wishes to thank the caring staff of the fourth floor of the Assiniboine Centre and Dinsdale Home. The Funeral service will be held at St. Matthew's Cathedral, 403 - 13th Street (13th and Louise Ave.), Brandon, on Tuesday, July 30, 2013 at 2:00 p.m. with The Venerable Paul Curtis officiating. Interment will take place at the Hillside Cemetery in Portage la Prairie at a later date. Flowers gratefully declined. Donations in memory of Ross may be made to the Alzheimer's Society, 4B, 457 - 9th Street, Brandon, MB R7A 1K2. "I have fought the good fight I have finished the course I have kept the faith." 2 Timothy 4:7 Messages of condolence may be placed at www.brockiedonovan.com. Arrangements are in care of Brockie Donovan Funeral & Cremation Services, Brandon, (204) 727-0694.