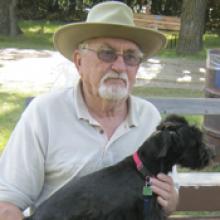 JAKOB CHRISTIAN DORNN Jakob Christian Dornn of Neepawa, Manitoba, passed away at the Brandon Regional Health Centre on Thursday, September 19, 2013. He was born at the Rockport Colony in Magrath, Alberta on March 11, 1936. His mother died when Jake was only four years old and three years later, the family moved to the Colony Farm at Bright, Ontario. The entire family endured many hardships and challenges while working extremely hard in this farming community. In his late teens, Jake moved to Fairholme Colony in Portage la Prairie, Manitoba. Jake lived for many years in Simi Valley, California where he worked at Budweiser and had a landscaping business. He eventually moved back to Canada with his family where he took up farming and started another landscaping business. Jake was an active member of the Lutheran Church in Neepawa. He took great pleasure in woodworking, fishing, camping and was an avid traveler. He was interested in all sports involving his children and grandchildren. Jake will be lovingly remembered by brothers Christian and Christopher Dornn, sisters Rosalie Baer and Elsa Baumbach; sons Bruce (Cindy) and Lance (Michelle) Dornn; grandchildren Layton, Ty, Carson and Madison. Jake was predeceased by his brothers Ron and Peter Dornn and sister, Mary Herner. The Funeral Service to honor Jake's life will be held at the Brockie Donovan Chapel, 332-8th Street, Brandon, on Sunday, September 22, 2013 at 1:00 p.m. with Pastor Mark Just officiating. A private family interment will take place at the Brandon Cemetery. Donations in memory of Jake may be made to the Brandon Regional Health Centre Foundation, "Palliative Care," 150 McTavish Ave. East, Brandon, MB, R7A 2B3. Messages of condolence may be placed at www.brockiedonovan.com Arrangements are in care of Brockie Donovan Funeral & Cremation Services, Brandon, (204) 727-0694.