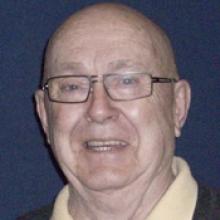 DONALD BARRIE MILNE April 11, 1938 - January 11, 2014 Donald Barrie Milne passed away peacefully at Brandon Regional Health Centre on Saturday, January 11, 2014. Prior to his very brief hospitalization, he had been residing at Hillcrest Place in Brandon. Known either as Don or Barrie, Mr. Milne was the only son of the late Alex Milne and Frances Milne-McKeown of Brandon. He is survived by his daughter Katherine Anne Milne of Winnipeg; aunts Anna Wall of Brandon and Shirley Mitchell (Walter) of Edmonton; many cousins and in-laws, and dear friends Elizabeth and Bill Goodridge. Don was predeceased by his wife Eleanor (Parker). He will also be remembered by his stepdaughters Patty (Eugene) Sansregret and Michele (Anthony) LaPointe-Dixon, grandchildren Crystal (Corey) LaPointe-Toyne, Kyle (Sarah) Sansregret, Marisa (Victor) Thompson, Nicholas Thompson, great-granddaughter Isabelle, and sister-in-law Sandra Miller. Don will always be remembered by his grandchildren for the time he spent with them either playing cards, telling stories or one of his famous jokes. Donald Barrie Milne was a charitable, kind and gentle man who loved the world and everyone in it. For much of his life he also enjoyed the companionship of his pets. He was devout and steadfast in his Christian faith. His affable, uncomplaining demeanour, in spite of health problems he endured for many years, was an inspiration to others. He rose to lofty positions in Toastmasters International and was keenly interested in history and military matters. He was proud of his association with the military and the Royal Canadian Legion, and grateful for the sacrifices made by Canadian men and women in uniform who have given so much to defend our freedom and preserve our Canadian way of life. Many thanks are extended to the staffs at Hillcrest Place and Brandon Regional Health Centre and Dr. Moller for their many kindnesses and the care they provided to Don. Donations in Mr. Milne's memory may be made to charities of choice. A memorial service will be held Saturday, January 18, 2014 at 3:00 p.m. at the Brockie Donovan Chapel, 332-8th Street, Brandon, with Rev. Paul Stade of First Baptist Church officiating. Interment of Don's ashes will occur at a later date. Messages of condolence may be placed at www.brockiedonovan.com Arrangements are in care of Brockie Donovan Funeral & Cremation Services Brandon, MB, (204) 727-0694.