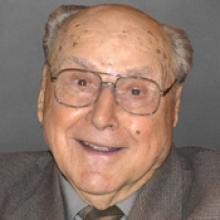 CONSTANTINE (GUS) (DINO) PAPPAS Constantine Pappas passed away in Brandon on Friday, July 11, 2014 at 92 years of age. He was with his wife, children, grandchildren, and great-grandchildren at that time. Born in the tiny mountain village of Kellini near Corinth, Greece on February 10, 1922, he was the youngest of four boys and four girls. Dino was well known in the Brandon business community as the owner of Union Shoe Store, which he operated from 1958 to 1987. Many thousands pairs of shoes passed through his hands during that time. He was married to his first wife, Fotina Mehos, in 1952 and immigrated to Canada immediately after, landing at the now famous Pier 21 in Halifax, followed by a long train ride to Brandon. He then worked for former Brandon Mayor, Steve Magnacca, as an electrician, and businessman, Tim Bass, who owned Canada Grocers from 1952 to 1958. Together, Dino and Fotina raised three children, Bob, Gina and Alex. He experienced a profound loss when Fotina passed away in 1992 due to illness. In 1994, he married Julia Zorzos and continued his life of retirement enjoying his many kids and grandkids and eventually great-grandkids. His favourite pastimes included hunting and trap-shooting in his earlier years. As time went on, it switched to keeping up to date on world news. Religion and politics were his favourite topics. He is survived by his wife Julia, children Bob (Angela), Gina, and Alex (Gillian). There are eight grandchildren, and two great-grandchildren. Also surviving are three stepchildren, Jake (Marianne), Litza, Chris (Danielle), six step-grandchildren, and one step-great-grandchild. Numerous nephews and nieces also survive him in Canada, Greece, and the U.S. He was predeceased by his first wife Fotina (1992), and an infant daughter Betty (1962). His mother and father, as well as all siblings have also predeceased him. Dino represented the end of an era in his generation. The family wishes to profoundly thank the staff at Rideau Park Personal Care Home and everyone at Assiniboine Centre A-3 for their exceptional care for Dad during his last six months with us. A very special thank you to nurse practitioner, Jennifer Ardiel, whom he called "The Doctor" and nurse Karen, whom he called "Mother Goose". A time of viewing and prayers will be held at the Brockie Donovan Chapel, 332-8th Street, Brandon, on Thursday evening, July 17, 2014 at 7:30 p.m. Funeral service will be held at the Brockie Donovan Chapel on Friday, July 18, 2014 at 3:00 p.m. Father Theodore Paraskevopoulos will officiate. In lieu of flowers, as per Dino's wishes, donations may be made to the Samaritan House Ministries or to similar organizations that serve the underprivileged locally in Brandon. Messages of condolence may be placed at www.brockiedonovan.com. Arrangements are in care of Brockie Donovan Funeral & Cremation Services Brandon - (204) 727-0694.