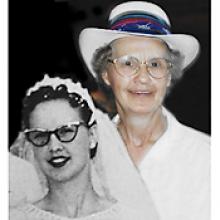 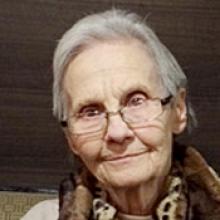 NELLIE KOSIOR (née LAMB) March 3, 1936 - February 27, 2015 The saddest moment is when the person who gave you the best memories, becomes a memory. On February 27, 2015, only three days before her 79th birthday, Nellie peacefully left this earth with her family by her side. She was predeceased by her father Mike Lamb, mother Anne Lamb, infant son Stefan, brother Richard (Dick) Lamb, brothers-in-law Charlie (McKay) and Frank (Kwiatkowski). Nellie is survived by three sisters, Eva McKay (Charlie), Vergie Kokorudz (Stanley), Marlene Gerelus (Bill) and sisters-in-law Maureen Lamb and Cecile Kwiatkowski. She leaves to mourn her husband Joseph of 57 years, children Jake (Irene), Walter, Charlene (Wayne) Thompson and Lisa. She also leaves five grandchildren, Leslie, Stefan, Kathleen, Olivia and Avery along with three great-grandchildren, Kaleigh, Joseph and Emberlynn. She had many cherished nieces and nephews. Nellie was born on the Lamb family homestead near Oakburn, Manitoba and attended Roger's Elementary School in Oakburn. Before the days of television and internet, Nellie and her siblings spent evenings together dancing to the tune of father's fiddle at the farm. At the age of fifteen, Nellie went with Eva to the big city of Brandon, Manitoba to work at the Brandon Packers Plant. Together, they lived in a small apartment on 2nd Street in Brandon and spent weekends dancing at the Palladium on Rosser Avenue. Nellie was very musically inclined playing the accordion, violin and piano with accordion lessons during weekday evenings. Nellie met her husband Joe on a blind date where he took her to the 1957 New Year's Eve Dinner and Dance at the Sokol Hall, and after a whirlwind romance, they were married only six months later on June 15, 1957. Together, they built a house and raised a family at 1834 McDonald Avenue in Brandon's North End. She was an active member of the Polish National Catholic Church and also the Sokol Hall. It was here that she made some of her closest friendships and had some of the best times of her life. For the first fifteen years of her married life, Nellie managed the family household and her four children. As the children got older, Nellie took on the role of administrator and book-keeper for the family business, Aurora Video and Audio until her passing. While Nellie and Joe spent many summers at the cottage in Clear Lake, Manitoba and 31 winters at the family home in Weslaco, Texas, they also travelled extensively together to destinations in the Caribbean Europe, South America and the United States. Nellie's hobbies included her rose and vegetable garden in Brandon and tending the grapefruit tree in Weslaco, Texas. She had amazing pickling and canning skills and we will remember many tireless evenings of Nellie working late into the night until the job was done. She was a master in the kitchen and could warm a hungry heart with not only her cooking, but her genuine compassion for her friends and family. She was well known in the VLT lounges and could light up any room as soon as she walked in. But, nothing could light Nellie up quicker than the love of her Joe, children, grandchildren and great-grandchildren. Nellie will be especially remembered for her quick wit and humor, perhaps responding too quickly and getting her words mixed up, but once she realized what she said, it was fun to all be in on the joke. Nellie touched the lives of many people with her smile and generosity, and maintained her trademark sense of humor all the way to the end. Whenever we feel sad because we miss you, we will try and remember how lucky we are to have someone so special to miss. Evening Prayers were held on Wednesday, March 4 at 7:00 p.m. at Brockie Donovan Funeral Home, Brandon, Manitoba. Nellie's Funeral Service was held on Thursday, March 5 at 11:00 a.m. at the Brockie Donovan Chapel. Interment followed at the Brandon Cemetery. In lieu of flowers, donations can be made to the Westman Dreams for Kids Foundation, 2-37 11th Street, Brandon, MB, R7A 4J2. Messages of condolence may be placed at www.brockiedonovan.com. Arrangements are in care of Brockie Donovan Funeral & Cremation Services, Brandon, (204) 727-0694
Publish Date: Mar 14, 2015

NELLIE KOSIOR Three days prior to her 79th birthday, Nellie Kosior, beloved wife of Joe, loving mother of Jake, Walter, Char and Lisa, doting grandmother to five grandchildren and three great-grandchildren, passed away peacefully, with her family by her side, at the Health Sciences Centre in Winnipeg, MB on Friday, February 27, 2015. Funeral arrangements are pending with Brockie Donovan Funeral & Cremation Services, Brandon, (204) 727-0694. Messages of condolence may be placed at www.brockiedonovan.com.
Publish Date: Feb 28, 2015