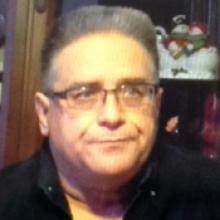 VINCENT RICHARD STONEMAN On March 18, 2015, at St. Boniface Hospital, Vincent Richard Stoneman "Thunder Cloud" entered the Spirit World at the age of 56 years. Left to mourn his passing are his wife Doreen, his daughters Candace Stoneman, Sara-Jo Disbrowe (Paul), son Carl Stoneman (Geri), stepchildren Kerry (Mary), Sherry (Sean), Erin (Maury), Owen (Jennifer), Barry (Michelle), 35 grandchildren and one great-grandchild. Vince also leaves behind his mother Louise, stepfather Pat Berthelette, brothers Brad (Tammy), Will (Christina), sisters Vicki (Sandy), Brenda (Mark), as well as his stepsisters Shannon, Kelsey, and stepbrother, Patrick. Vince was predeceased by his father David John Stoneman, grandchildren Jo-Anna and Gabriel Disbrowe, mother and father-in-law Alice Malcolm and Joe Garneau, sisters-in-law Lena and Delma-Rose, brother-in-law Clifford, and his maternal and paternal grandparents. Vince was greatly loved and admired by all of his nieces and nephews, as well as his BUNTEP and PENT students. The family wishes to thank the fire keepers, extended family, friends and community for all the kindness and support shown to Vince over the years. A traditional wake will be held at the Kinesota Hall, Kinesota, MB, on Friday, March 20, 2015 at 5:00 p.m. Funeral service will be held at the Kinesota Hall on Saturday, March 21, 2015 at 1:00 p.m. with Rev. Jona Weitzel officiating. Interment will follow at St. Bede's Cemetery. In lieu of flowers, donations can be made to the Kidney Foundation of Canada, Manitoba Branch, Unit 1-452 Dovercourt Drive, Winnipeg, MB R3Y 1G4. Messages of condolence may be placed at www.brockiedonovan.com Arrangements are in care of Brockie Donovan Funeral & Cremation Services Brandon, (204) 727-0694.