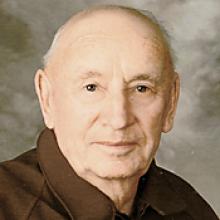 PETER LOUIS MARTIN QUINTAINE After a long and productive life, Pete Quintaine passed away peacefully at his residence, Hillcrest Place Personal Care Home, Brandon, on Friday, April 3, 2015 at the age of 97 years. Pete was born on his parent's farm at Mather, Manitoba on November 5, 1917. He attended Rock Lake and Mount Prospect Schools. He left school at the age of 13 with grade seven to help his father on the land. Pete was known from a young age for his phenomenal memory and his indomitable determination. His family moved to a farm in the Copperfield School District near Pilot Mound in 1932 and in 1942, Pete took over operation of that farm. He hired his first help at the age of 17. Pete's ambition and drive to succeed were not satisfied by farming, so in 1941, he began buying and selling livestock in addition. Buying his first truck, a 1938 Ford, was an important step in starting his business. Livestock was hauled to Winnipeg by rail and Pete spent years riding the train to Winnipeg weekly to establish his business. In 1942, Pete married Kae Orr and they had three children, Bettie, Pat and Jim. Together, Pete and Kae farmed and built up the livestock and hauling business from Pilot Mound until 1967, when they moved operations to Brandon. Jim grew up helping his dad and became a part of the family business as soon as he left high school. In 1971, Pete and Jim began the exporting of livestock to the United States. It was a source of great pride for Pete to work with Jim and to see the business continue to expand. He remained involved as long as he was capable, having no desire to retire since he still revelled in the challenges business presented. He possessed an intensive work ethic and strong organizational skills along with a keen ability to solve problems. He expressed his aims in life clearly "To do the best that you could with what you had; to look after your family; to be a good neighbour; and to help others whenever you could." Pete and Kae travelled to the southern United States for many winters. He always wanted to learn new and different ways of doing things from their travels. Pete was very musical and played various instruments for dances in his younger years, often arriving on horseback or by team and sleigh. Old time fiddling contests were great entertainment for him as he grew older and he took a keen interest in following young musicians. He was interested in vintage vehicles and had a small collection which he enjoyed. He loved to attend the Thresherman's Reunion. After Kae's death in 1989, he moved out of Brandon building a new house on the farm. He lived there until the fall of 2004, when he suffered a series of strokes and his need for care required him to move to Hillcrest Personal Care Home in Brandon. Pete was predeceased by his father in April 1943, his mother in January 1963, his wife Kae in 1989, sisters Dorothy Harris in May 2000 and Vera Vanderburgh Dreger in May 1995, and daughter-in-law Deb in 2014. He will be deeply missed by his family, daughters Bettie Wood and her husband Barrie, Pat Davis and her husband Clarence, and son Jim; grandchildren Sharmyn Hamilton, Paula Stirling, Rob Davis, Gerry Davis, Dan Davis, and Corey Quintaine; and ten great-grandchildren. Special thanks to Dr. Groves for his many years of care and to Kathy Traill and staff at Hillcrest Personal Care Home for their exceptional care throughout the 11 years Pete made his home there. The funeral service will be held at Brockie Donovan Chapel, 332-8th Street, Brandon, on Saturday, April 11, 2015 at 2:00 p.m. with Rev. Barbara Jardine officiating. A private family graveside service will take place prior to the public celebration of Pete's life. The grandchildren will act as pallbearers. Donations in memory of Pete may be made to the Recreation Millennium Complex Fund in Pilot Mound c/o The Municipality of Louise, Box 310, Crystal City, MB R0K 0N0 or to a charity of their choice. Flowers are gratefully declined. Messages of condolence may be placed at www.brockiedonovan.com. Arrangements are in care of Brockie Donovan Funeral & Cremation Services, Brandon, (204) 727-0694.