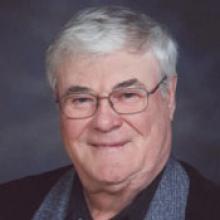 JEAN (JOHN) LOUIS VACHON May 18, 1940 - April 8, 2015 It is with heavy hearts that we announce the passing of our dear husband, father, grandfather and brother on Wednesday, April 8, 2015 at Souris Hospital. Jean passed away peacefully, with family by his side, after a courageous battle with cancer. Jean devoted his entire life to God, Family, and the Farm. His focus on these three elements formed the man he became. As a young child, Jean's devotion began with his mother and father's faith in God, attending a small one-room Hesselwood country school, and working on the family farm. After completing school to Grade 8, Jean continued to work with his father South of Oak Lake until he later married Anita (Desrochers) and purchased the family farm in 1962. Jean's devotion enabled him to enjoy and endure all the good and bad that life had to offer. During this time he had four boys (Louis, Paul, Daniel, and Guy). Jean and Anita loved the family farm life, to see their children grow and to be able to all work together. His ability to keep everyone involved with hard work and actually like it is very impressive. Jean enjoyed family and community gatherings, dancing, good food, drink, and a good joke. He was known for the laughter he shared with others through his generous and giving nature. Unfortunately, life can throw its misfortunes. In 1997, Anita passed away with cancer, devastating the family unit. With the help of his faith in God, the support of all his family and friends, and the farm to keep him busy, Jean was able to cope and move on. Life can also bring good. Jean could not see himself alone so started to venture from the farm to find new friends. In 2002, Jean married Marie Roy who came with her three children (Lucien, Suzanne, and Maurice) and their children. Jean and Marie started their new life in Brandon. At this point, Jean slowed up his time on the farm to do more dancing, travelling, and be with family. Jean's devotion to God, Family, and the Farm allowed him to become a loving husband, father, and friend. This devotion even prepared him for the final chapter of his life, cancer. Despite his battle with cancer, he maintained a positive attitude and embraced the opportunity to prepare himself, his family, and his friends. Jean made it very clear to everyone that he was happy with the life he was given. Thank You Papa. Jean is survived by his beloved wife Marie Roy (née Lussier), his four sons Louis (Sherri) of Oak Lake, Paul (Jeanne) of Oak Lake, Daniel (Tammy) of Ile des Chênes and Guy (Johanne) of Winnipeg, stepson Lucien (Ginette) of Winnipeg, stepdaughter Suzanne (Roberto) of Winnipeg and stepson Maurice (Corry) of Macdowall, SK, who all meant the world to him. He was a proud father and grandfather. His 24 grandchildren were the joy of his life: Janelle, Albert, Natalie and Marc, David, Nicholas, Alicia, Adrian and Emilie, Anita, Michael, Nadine and Julie, Jeremy, Devon and Kyle, Chantal and Rachelle (Roy), Kalene Roy (Devin Jackson) and Jesse (Roy), Matthew and Josee (Trzaskowski-Roy) and Kode and Leesha (Sinclair). He will be lovingly remembered by his eight sisters Alice (Alarie), Thérèse Vachon, S.G.M., Jeanne (Côme) Fillion, Irène (Arthur) Boulet, Annette (Roger) Blaise, Cécile (Marcel) Bourgouin, Marie-Ange (Léon) Ricard and Helene (Jim) Ross and three brothers Eugène (Dolorès), Gérard (Diane) and Marcel (Aline). He is also survived by his mother-in-law Gemma Stevens, sisters-in-law Yvonne Seewald and Emelie Lavallee, and brother-in-law Louis Lussier, as well as numerous nieces and nephews. Jean was predeceased by his first wife Anita (Desrochers), father and mother Albert and Bernadette (Labelle), brothers Louis and Denis, sister-in-law Marie (Grisé) Vachon, brothers-in-law Gérald Desrochers, Emilien Alarie, and Paul Seewald, fathers-in-law Albert Desrochers and John Stevens, mother-in-law Beatrice (Boulet) Desrochers, and daughter-in-law Sheryl-Lynn (Robbins) Vachon. Prayers will be held at the Brockie Donovan Chapel, 332-8th Street, Brandon, on Friday, April 17, 2015 at 7:00 p.m. Mass of Christian Burial will be held at St. Augustine's Roman Catholic Church, 327-4th Street, Brandon, on Saturday, April 18, 2015. Viewing will take place between 10:15 a.m. to 10:50 a.m. Service will begin at 11:00 a.m. with Fr. Michael Raj Savarimuthu as Celebrant. Wheelchair accessibility for ceremony and reception available. Active and Honorary Pallbearers will be Louis, Paul, Guy, Lucien, Maurice, and Daniel. Interment will follow later at the Oak Lake Cemetery. In lieu of flowers, please consider donations to one of the following: Canadian Cancer Society, 415-1st Street, Brandon, MB R7A 2W8, Oak Lake Cemetery, Box 192, Oak Lake, MB R0M 1P0 or to St. Augustine's Roman Catholic Church, 327-4th Street, Brandon, MB R7A 3H1. Thank you to Dr. David Cram and the nursing staff at Souris Hospital and Brandon Palliative and Home Care personnel for all their support and help in making Jean's last days as comfortable as possible. Messages of condolence may be placed at www.brockiedonovan.com Arrangements are in care of Brockie Donovan Funeral & Cremation Services Brandon, (204) 727-0694