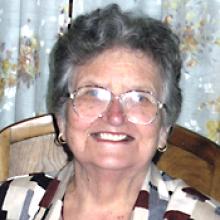 ILONA SZAKALY Ilona passed away on Friday, April 17, 2015 at the age of 83 years. Ilona (Horvath) was born on June 11, 1931, the fifth of six children in Gyor-Szentivan, Hungary. She married Sandor on March 28, 1948. The family (of four) left Hungary in 1956 during the Hungarian Revolution and after a brief stay in Germany, immigrated to Winnipeg, Manitoba, Canada. The family (of six then) moved to Brandon in 1969 and she lived there until very recently. Ilona was predeceased by her beloved husband of 64 years, Sandor, on August 29, 2012. She will forever be cherished and lovingly remembered by her four children; Ilona Ward (Bob), Sandor Szakaly (Ildiko), Katalin Baker (Vernon), and Ferenc Szakaly. She also has 10 grandchildren and 12 great-grandchildren. Special thanks for the care she received at both Victoria Landing and Minnedosa Personal Care Home. Mass of Christian Burial will be held at St. Augustine's Roman Catholic Church, 327-4th Street, Brandon, on Friday, April 24, 2015 at 10:00 a.m. with Fr. Patrick Neufeld as Celebrant. Interment will follow at the Brandon Cemetery. Mom, Grandmother, you will be in our hearts forever. Anyu, Nagymama, mindeg vellunk leszo szivunkbe. Messages of condolence may be placed at www.brockiedonovan.com Arrangements are in care of Brockie Donovan Funeral & Cremation Services Brandon, (204) 727-0694