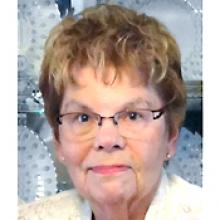 ALICE LORRAINE EVANS May 18, 1934 - June 17, 2015 Surrounded by her family, Alice Evans (née Mazinke), beloved wife of Len Evans and dear mother of Brenda (Ron Bell), Janet (Chris Newton) and Randall (Cathy Rogers Evans), passed away at the Assiniboine Centre in Brandon on June 17, 2015 at the age of 81 years. She is also survived by four grandsons; Jamie (Amy), Devon (Ashley), Andrew, and Jeffrey and five great-grandchildren, Spencer, Corbin, Reegan, Keira, and Griffin. Alice was born on a farm in the tiny hamlet of Sewell near Morris, Manitoba on May 18, 1934. Her early years on the farm were one of the happiest times of her life. When economic hardship struck and farming was no longer viable, her family moved to Transcona in 1944. There she met Len at the young age of 15 and was married three years later in 1953. They were blessed with a long and happy marriage and would have celebrated their 63rd wedding anniversary on June 27, 2015. Alice always thought she would have a quiet life raising her children in the family home. However, following Len's pursuits, Alice and the family ended up living in various parts of the country: Aylmer (Quebec), Ottawa, Winnipeg, Brandon and Vancouver. Despite the many moves, Alice always made long, lasting friendships with kindred spirits wherever she lived. Alice and Len also enjoyed travelling and took many winter holidays over the years. To celebrate Alice's 80th birthday, a special family holiday to England was taken last summer to visit son, Randy. Alice had a lifelong interest in British royalty and had the privilege of meeting the Queen and others in the royal family on several occasions with her husband, Len, a member of the Manitoba Legislature for 30 years. A visit to Windsor Castle last summer was a highlight for her. A founding member of the Brandon East N.D.P. Women's Association, she was an active participant for more than 40 years. She considered the dear friends she made there her second family. Alice was also a member of the Unitarian Church of Winnipeg for many years and valued the numerous friendships she made there. She had a spiritual connection with nature and the prairies held a special place in her heart. She loved quiet, wild places. Birds Hill Park, her cottage at Sunset Beach and cabin on the Birdtail River were her refuges. Alice loved wildlife, especially birds. She spent hours watching various birds visiting her many birdfeeders. She was passionate about the environment and supported causes protecting parks and wilderness areas. Alice was a loving mother and raising her children was the most important thing in her life. She was proud that she was a stay-at-home mom and credited that with how well her three children turned out. She loved spending time with her grandsons as they grew up and more recently her great-grandchildren brought her much joy. Alice's nurturing instincts touched everyone she encountered. Gentle, kind, compassionate and generous, she never forgot a birthday and could always be counted on to give a hug. Alice: wife, mother, grandmother, great- grandmother, aunt, friend, you will be missed. The family would like to thank Doctors Smith and Kaiser and the staff of the Brandon Regional Health Centre for the wonderful care Alice received during her illness. In keeping with Alice's wishes, cremation took place and a private family gathering will be held. A memorial bench will be placed at the Riverbank Discovery Centre in Brandon and a reception will be held for friends and family at a later date. In lieu of flowers, donations may be made to the Canadian Parks and Wilderness Society, "C.P.A.W.S." Manitoba Chapter, 3-303 Portage Ave., Winnipeg, MB R3B 2B4. Time for us to part now, I won't say goodbye; Look for me in rainbows, shining in the sky. Every waking moment, and all your whole life through Just look for me and love me, as you know I loved you. Messages of condolence may be placed at www.brockiedonovan.com. Arrangements were in care of Brockie Donovan Funeral & Cremation Services, Brandon, (204) 727-0694.