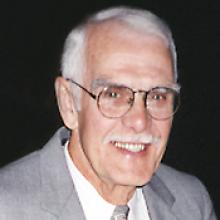 KENNETH OSWALD BICKNELL Kenneth passed away peacefully at the Assiniboine Centre with his family at his side on the evening of July 14, 2015 at the age of 87. Ken was fortunate to have lived independently in the home he built in Brandon's east end and enjoyed his cottage at Clear Lake until two weeks before his death. Born on May 12, 1928 in Meacham, Saskatchewan to Oswald Karl Bicknell and Mary Madeleine Hogan. The family moved to Brandon when Ken was an infant, Brandon became his lifelong home. Growing up in a family of eight children during the depression instilled in Ken a commitment to family and service to others, a strong work ethic, humility and determination. He is survived by his five children, Monique (Brian Danaher), Michelle (Gord McFadden), Ken (Laurie), Cathy (Marty Nelson), Vivian (Darcy Lynne, sons Tanner and Tyson), his 10 grandchildren whom he fondly referred to as his Petunias and Macs; Kendra McFadden (Jason Bayne), Kyle Danaher, Nicole McFadden (Matthew King), Danielle Danaher (Matthew Christoff), Marcia McFadden, Sydney, Bridget, Drew, and Audrey Bicknell, Eric Nelson, one great-grandson, Oliver Bayne, brother Terry (Judy), sister-in-law Mary Ann, sister-in-law Delphine, brother-in-law Roland (Yvonne), and many nieces and nephews. Predeceased by his wife Vivianne in 2012, his parents Ozzie and Madge, his five sisters Iris, Marguerite, Noreen, Madeleine, and Joan, his brother Ted, sister-in-law Denise, and his best friend Nick Bass. Ken attended high school at Brandon Collegiate Institute during the war years, spending a significant amount of time in the gym and at the YMCA. Ken attended Notre Dame College at Wilcox, Saskatchewan; an education that he said went well beyond the classroom to include personal mentorship from Pere Athol Murray, and survival of the harsh winters of Saskatchewan. Ken met and courted Vivianne Maguet at Clear Lake and in 1953 they were married. He became a Chartered Accountant in 1959 and spent his professional career at Donovan Stone and Co. and Dunwoody and Company. Ken made many significant contributions to both firms and to the accounting profession; he especially enjoyed teaching accounting classes at Brandon University. Ken was recognized in 1978 when he became a Fellow of the Institute of Chartered Accountants. Ken enabled many entrepreneurs to establish successful businesses through his acumen, financial support and mentorship. Community commitment and volunteerism were core tenets of Ken's; he served at the community, civic, provincial and national levels for numerous community, health, arts, sport and philanthropic organizations. His involvement often culminated in formal leadership positions. Of particular note was his role as Governor of District 2 for Kinsmen, where he was influential in the creation of the Kinsmen Centennial Pool in Brandon's east end, and his long service on the then Brandon General Hospital Board where he was a leading force in the creation of the Hospital's Foundation, (now the BRHC Foundation), which he also chaired. Ken's favourite spot was the family cottage at Clear Lake where he enjoyed special times with family and friends, cycling, gardening, sailing, and gourmet family meals. He was still riding his bike at 87! An avid skier, Ken enjoyed many trips to the Rockies and Whistler. For an accountant Ken was very creative. He could build a house, paint a landscape, design a gingerbread house, and create awesome Halloween costumes for his kids. Ken and Vivianne loved to travel, highlights include European travel, a trip around the world in 1987, and annual trips to Mexico. Ken's devotion to family and friends was a lifelong passion. In recent years he delivered Meals on Wheels, prepared tax returns as a volunteer, was a caretaker for aging family and friends, and was a constant source of guidance and support to his children and grandchildren. Prayers will be held at the Brockie Donovan Chapel, 332-8th Street, Brandon, on Monday, July 20, 2015 at 7:30 p.m. Mass of Christian Burial will be celebrated at St. Augustine of Canterbury Church, 327-4th Street, Brandon, on Tuesday, July 21, 2015 at 11:00 a.m. with Fr. Patrick Neufeld as Celebrant. The family appreciates the kindness of many friends and neighbours who helped Ken remain independent over the last few years. Special thanks to David Bass, Hans Rindlisbacher, Peter Kaskiw, and his coffee buddies. The family acknowledges the dedicated and exceptional staff in the ER, on 400 at Brandon Regional Health Centre, and in the Assiniboine Centre Palliative Care Unit for their compassion and loving care of Ken in his final days. Should friends so desire, the family would appreciate donations in Ken's memory to The Brandon Regional Health Centre Foundation, 150 McTavish Avenue East, Brandon, Manitoba, R7A 2B3, the foundation most dear to his heart. Messages of condolence may be placed at www.brockiedonovan.com. Arrangements are in care of Brockie Donovan Funeral & Cremation Services, Brandon, (204) 727-0694.
Publish Date: Jul 18, 2015

KENNETH OSWALD BICKNELL Kenneth Oswald Bicknell of Brandon, passed away peacefully at the Brandon Regional Health Centre on Tuesday, July 14, 2015 at the age of 87 years. Prayers will be held at the Brockie Donovan Chapel, 332-8th Street, on Monday, July 20, 2015 at 7:30 p.m. Mass of Christian Burial will take place at St. Augustine's Roman Catholic Church, 327-4th Street, on Tuesday, July 21, 2015 at 11:00 a.m. with Fr. Patrick Neufeld as Celebrant. Donations in memory of Ken may be made to the Brandon Regional Health Centre Foundation, 150 McTavish Avenue East, Brandon, Manitoba R7A 2B3. Complete obituary information to follow. Messages of condolence may be placed at www.brockiedonovan.com Arrangements are in care of Brockie Donovan Funeral & Cremation Services, Brandon, (204) 727-0694.
Publish Date: Jul 16, 2015