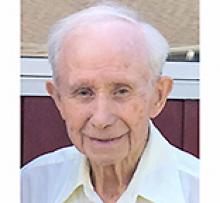 It is with great sadness that we announce the passing of Glenn Logan on Sunday, September 22, 2019 at the age of 95.
Glenn is survived by his daughter Nancy (David) Hay, grandchildren, Michael, Mathew and Ashley, his brother Murray (Jean), sister-in-law Bernice, sister-in-law Janet, as well as many nieces and nephews.
Glenn worked for the Abitibi Paper Company for 19 years, then started his chosen career as a carpenter and handyman in Pine Falls. His favourite saying was, "I love being my own boss" and he was until the end. Glenn will be laid to rest at his hometown cemetery in Mount Hope, Ontario beside his beloved son Ralph (1976).
I would like to thank home care for the fantastic care they gave my dad over these past years, which enabled him to stay in his home longer.
As per Glenn's wishes there will be no service and in lieu of flowers, donations to the Canadian Diabetes Association would be appreciated.