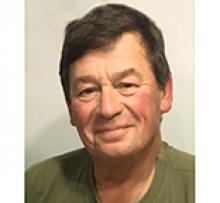 It is with extreme sadness we announce the passing of Kenneth Shandroski, peacefully at his rural home, at the age of 62.
He will be missed by his wife Pat, son Andrew (Alex), daughter Ally (Elliot), brother Fred (Donna), mother-in-law Irene Dobush, sister-in-law Chris Dobush, nephew Adam (Amber), nieces, Heather and Allison (Brad). A large void will also be felt by the extended family he always seemed to create, many who knew him as Uncle Kenny.
He was predeceased by his son Daniel (2014), father-in-law Ed Dobush, and parents, Nick and Marie.
Ken grew up in Hadashville, began a 23-year career with the Department of Highways and moved to Winnipeg in 1978 where he continued to work throughout the province primarily with the Seal Coat Crew. Using that knowledge and experience he changed careers, bought a semi-truck and worked for Jade Transport until his retirement in 2017. Upon retirement Pat and Ken returned to Hadashville where he spent time at his favourite hobbies; cutting grass and cultivating more friendships.
A memorial service will be held on Friday, November 1 at 10:30 a.m. at Sobering Funeral Chapel, 1035 Park Ave. E., Beausejour. Interment in St. Mary's Riverside Cemetery in Prawda and lunch to follow at Reynolds Community Club in Prawda.
Donations gratefully accepted to St. Mary's Riverside Cemetery, RR1, McMunn, Manitoba R0E 0X0.

The coffee was always brewed, an extra
chair was always found and the stories would go on forever. Friends and family are a cherished gift; the circle was wide.

This obituary may also be viewed at Sobering's website.