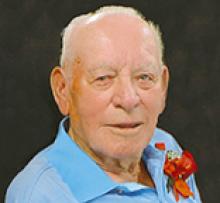 With great love, we share that Eric Werner passed away peacefully on Monday, December 9, 2019, at East Gate Lodge in Beausejour.
He will be lovingly missed and remembered by his wife, Gladys; his son Dennis and his daughter Janet (Larry); his grandchildren, Korie and Courtney Werner, Casey and Lucas Stadnyk; his sister Lorraine; brother Olaf (Rebecca); and Irma's family.
Eric is predeceased by his wife Irma; infant son Douglas; his parents, Alexander and Emilie; and his sister Bonita.
Eric was born in Thalberg and raised on the family farm. He married Irma Otto on October 21, 1961. They farmed together until they retired and moved to Beausejour in 2000. Eric enjoyed travelling and driving around checking the crops. He served on church council and volunteered throughout his life, serving his communities. He could be found at the local coffee shops with his many friends. Eric made friends wherever he went.
Sadly after 45 years of marriage, Irma passed away in September 2006. On November 1, 2008, Eric married Gladys. Due to failing health, Eric moved to East Gate Lodge in March, 2019. True to form, residents and staff quickly became family to him. Eric's family are incredibly grateful for the love and care he received. You were all a true blessing!
Eric was the oldest parishioner at his church, so only fitting for him that a Celebration of Life will take place at Trinity Lutheran Church in Thalberg on Saturday, December 14, 2019 at 3:00 p.m., with viewing one hour prior. Interment will follow in the church cemetery.
In lieu of flowers, donations may be made to Trinity Lutheran Church, P.O. Box 57, RR3, Beausejour, MB R0E 0C0 or the Recreation Department at East Gate Lodge, P.O. Box 1690, Beausejour, MB R0E 0C0