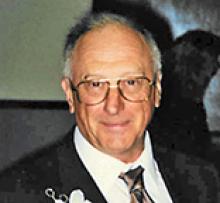 It is with profound sadness that we announce the passing of our father, grandfather and great-grandfather.
He will be greatly missed by his four children, Roxanne (Doug), Nancy (Shawn), Richard (Gwen) and Caroline (Dan). His five granddaughters, Meaghan, Rachelle, Gabrielle (Matt), Shayla and Kira-Lee. And by his one and only great-grandson Jean-Pierre. Also by many sisters and brothers, nieces and nephews, but especially his dear friend Rejean Poulin and family and the staff and residents at Actionmarguerite St. Vital.
Dad was predeceased by his parents, Henriette and Marie-Louis; brother Alain; sisters Raymonde and Michelle; his two infant daughters, Claudine and Marie; and by the love of his life and soulmate, Claudette, whom we lost in 2002.
Dad was born the eldest of 16 children. He grew up in St. Victor de Beauce, PQ. He met mom in Maine when he was working in the U.S. and they were married May 31, 1958. They moved back to Quebec where they started their family. Our father had a love for stock car racing, but retired from racing in 1972. In 1974, our parents packed up our family and moved us to Winnipeg. We settled in West Kildonan until 1985, when they moved the family to Grande Pointe, there they stayed until mom passed away, and in 2013 dad went into his last home at Actionmarguerite St. Vital.
He had a love for hunting, fishing and camping. Enjoyed and loved every moment that he spent with his three eldest granddaughters and his great grandson. But he loved hockey and football the most. He was also quick witted and sarcastic. In this he shared that passion with his youngest child and watched as many games together as possible.
He spent his life working as a drywaller, but was not afraid to do odd jobs when the business was slow. Upon retiring, he returned to stock car racing as a hobby and did that until 2005. A car accident in November of 2005 changed the course of his life forever. We were lucky to have had dad for an additional 14 years after that.
We knew that his passing would leave a bigger hole in our hearts, but he went in a true Canadian fashion. As we sat vigil by his bedside on Sunday, we had the World Junior Hockey game on the T.V. He went peacefully a few minutes after Canada won the gold medal.
Dad was our constant. He was always there for us. He was our rock, our hero and he will always be our Superman. And we know that you and mom are back in each other's arms.
We would like to thank the staff at Actionmarguerite St. Vital for all their hard work and patience with dad. We appreciate everything you did for him until the end.
There will be no services as per dad's wishes. Cremation has taken place and a private family interment will be held at a later date.
In lieu of flowers, the family would like if you made donations to Dementia or Parkinson Foundation, CancerCare Manitoba Foundation or to Actionmarguerite St. Vital.

Family and friends may sign a
Book of Condolence at
www.desjardinsfuneralchapel.ca.