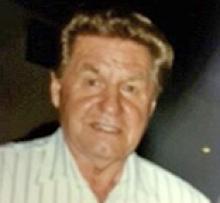 Dad passed away peacefully, at the Southeast Personal Care Home, at the age of 92 years.
Mom predeceased him on December 11, 2018.
He is survived by his five children, Dick (Gladys), Jeannet (Glen), Betty, John (Kathleen), Robert (Jennifer), six grandkids and five great-grandkids. Dad has one surviving brother Kees (Joan) and brother-in-law Ben.
Born in the Netherlands, dad lived in difficult times, he grew up during the depression and was 13 when the German forces invaded Holland. In 1948, he was conscripted into the Dutch Royal Marines in the Engineering Corps where he learned bricklaying as his trade, and was sent to Indonesia for a year.
He met mom before this, at a celebration of the end of Second World War. They corresponded and when dad returned from Indonesia, they planned their lives together. They decided to immigrate to Canada, so they were married in May of 1952, and arrived in Canada a few weeks later. Dad started out with construction jobs, mainly as a labourer and eventually became a foreman and finally bought the company.
In the meantime, mom and dad built their own home and raised five children together. They also bought and renovated their cottage and enjoyed several decades of fishing, barbecuing, boating, blueberry picking and watching their kids and grandkids enjoying the lake.
Dad also loved travelling and driving, going on many road trips to the States, returning to the Netherlands to visit relatives, and enjoyed reading.
Services will be held at Mary, Mother of the Church, 85 Kirkbridge Drive on Thursday, January 30, 2020, at 11:00 a.m. with lunch to follow.
In lieu of flowers, contributions can be made to the Heart and Stroke Foundation of Manitoba.
Thank you to the very caring staff at the Southeast Personal Care Home for all their concern and treatment of dad during his time there.

Family and friends may sign
a book of condolence at www.desjardinsfuneralchapel.ca.