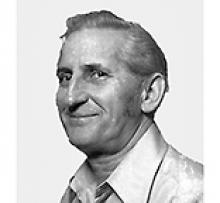 With great sadness and heavy hearts we announce the passing of Alfred Lang.
Predeceased by his wife, Hilda; father, Gideon; mother, Lena; and brothers, Leonard, Stan, and Ted.
Alf was born on the family farm at the start of the Great Depression. Due to a heart murmur, the doctor told his mom he wouldn't live past five. The last laugh on that goes to Alf. Though times were hard, he said they always had food and plenty to share. A generous trait that stood him well throughout his life. He had fond memories of the farm. Training his horse to perform tricks, like the cowboys of his youth, milking 60 cows twice a day, and learning to weld with "The Hobart" in his uncle's blacksmith shop. At 15 his dad sold the farm, so Alf hit the rails and worked building grain elevators across western Canada. Returning to Maidstone, he met a young lady working at the local soda shop; they fell in love and spent the next 45 years together. Looking for better jobs they moved to Winnipeg, where Alf found work at Whittler Furniture, then moved on to house framing with Suzuki Bros. He then landed his dream job. Motor Coach was hiring welders, so he applied there. The foreman asked for his welding papers, which Alf didn't have. The foreman pointed to the welder, a Hobart like his uncle's. He set up the machine "just, so-so" as he would say. He spent the next 27 years, until retirement, as their stainless steel jig maker, working on all their new designs, the MC6 being his favourite.
With no children of their own, Alf and Hilda spent many years helping to raise "their boys", nephews, Gary and Bill Wegner. Alf and Hilda loved all their nephews and nieces, the Wegners, Bauers, Ziehmanns, and all the Langs of Alberta. 1967 was a magical year for Alf and Hilda. After 15 years of marriage, the Good Lord blessed them with the birth of their daughter, Bonnie. When MCI opened a new facility in Fort Garry, land was bought in Charleswood, and together Alf and Hilda built the family home on Haney Street. Money was tight and they loved to tell stories of how they bartered with the lumberyard manager, getting materials up front and paying for them later, something unheard of at the time. Their house truly was their home.
When Bonnie got married, Alf said he gained a son, not a son-in-law. They were again blessed with the arrival of three grandchildren. Sadly, in 1997, Hilda passed away, and Alf started a new chapter in life.
Retirement was spent helping his son-in-law with house renovations, and many building projects throughout Winnipeg. Due to Alf's generosity, farm land was bought in Green Oak, and a new house was built. Alf then moved in with his daughter, son-in-law, and grandkids. The farm boy was home, the circle complete. Alfred's life was not without hardship. Diagnosed at 62 with stage 4 colon cancer, he was a survivor. As Bonnie would say "Her Energizer Bunny". Two heart attacks and a broken hip failed to slow him down. At 90 he fell and broke his pelvis, followed by two more heart attacks. As he walked out of the hospital six months later, he declared he'd live to 100. Although that wish will not happen, the day before he passed he said, "I was born on the farm, I sure hope I get to die on the farm." Wish granted! Alfred was the last living member of his family. His faith in God was his strength and anchor.
Alf is survived by daughter, Bonnie (Malcolm); adored grandchildren, Roisin, Conor, and Eamon; and faithful companions, Little Bear, and Cricket.
His family would like to thank Dr. Yatish Kotecha for his compassion and care throughout the years. Thank you to the doctors, nurses and staff at the Beausejour Hospital for their care during his many stays. Also, thank-you to the Beausejour Paramedics and RCMP for your care and kindness. We also thank all of his "ladies", the home care team that took special care of him over the past two years. Without your help, care, compassion and kindness, Alfred would have been unable to stay on the farm. Lastly, we would like to thank Rhonda and staff at Sobering Funeral Home, for your kindness and guidance.
As per Alf's wishes, no formal service will be held. Cremation has taken place.

Forever in our hearts
Clan Ratcliffe