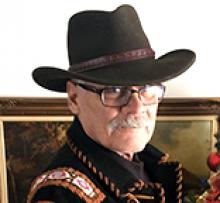 It is with heavy hearts that we announce the passing of Jacques Lemire on Tuesday, February 4, 2020, at the age of 70, at Pine Falls Hospital, after a lengthy battle with cancer.
Jacques will be lovingly remembered by his wife Linda, who he married in April of 1970, son Duane, five grandchildren, mother-in-law Jeanne, seven siblings and many nieces, nephews, and friends. He was predeceased by his sons, Lorne and Curtis, his mother Jeanne, father Noel, father-in-law Ralph Lavoie, and two siblings.
Jacques served 25 years in the Armed Forces as a P.A. Jacques, with his family, loved to travel and has been all across Canada, as well as several other countries overseas.
Funeral Mass will be celebrated at 11:00 a.m. on Friday, February 7 at Notre Dame du Laus Roman Catholic Church in Powerview with Rosary beginning at 10:30 a.m.
In lieu of flowers, donations may be made to CancerCare Manitoba Foundation, 675 McDermot Avenue, Winnipeg, MB R3E 0V9.