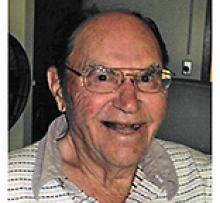 The family is saddened to announce the passing of their father, grandfather, great-grandfather, brother and uncle, on February 27, 2020.
Dad was born in St. Jean Baptiste, Manitoba and along with his siblings, was raised most of his younger life on a farm near St. Pierre, Manitoba. He was the eldest sibling of the family.
He married Irène Grégoire on July 16, 1955, and had two sons and two daughters. Dad and Mom continued working the family farm until their retirement. Dad enjoyed farming the land, being an active participant in town committees, and taking part in local horticultural fairs. Winning prizes for his vegetables and grain displays were some of the highlights for him. He also enjoyed playing cards, reading, and gardening.
Dad and Mom moved upon their retirement to the Windsor Park area of Winnipeg, Manitoba, in the later 1990s. There they soon made friends and became members of the Windsor Park Community Club. Dad and Mom later relocated to the Chalet Malouin, an assisted living facility in St. Malo, Manitoba. In July 2019, Dad moved to the Repos-Jolys, a personal care home in St. Pierre, Manitoba.
Dad was predeceased by his wife, Irène; his parents, Fortunat and Hélène; and his five brothers, Marcel, Denis, Camile, Henri, and Lévis. Dad is survived by his four children, Marcel (Donna), Madeleine (Gord), Paulette (Victor), and Donald (Jeannette); and by his three sisters, Rita, Yolande, Agnes.
Complying with his wishes, cremation has taken place and a private family service was held.
Thank you to the staff of the Chalet Malouin, the Centre medico-social De Salaberry District Health Centre in St. Pierre, and the Repos-Jolys for the great care given to Dad over the years.
Flowers are gratefully declined and donations may be made to the charity of one's choice.

Family and friends may sign a
book of condolence at
www.desjardinsfuneralchapel.ca.