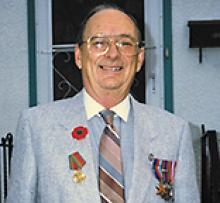 John Rousseau, dearly loved husband, father, grandfather and great-grandfather, passed away peacefully and returned home to be the Lord and his Heavenly Father at the age of 95 years, on March 6, 2020.
Devoted and beloved husband of Helen (nee Blair) Rousseau, his wife of 73 years, John leaves behind two daughters, Catherine (Robert) Kramble and Patricia (David) Sunley; four grandchildren, Tessa (Rico), Jamie, Shanna (Travais) and Brandis; six great-grandchildren, Alexandra, Joseph, Malinda, Jeffrey, Ellerie and Annika; and sibling Sister Helene Rousseau. He is predeceased by his daughter Elaine; parents, Antoinette and Georges Rousseau; and siblings, Olivier, Robert, Georgette, Madeleine and Pauline.
Born in Ponteix, Saskatchewan on January 27, 1925 to a large French-Canadian family, John served in the Canadian Navy in the Second World War, surviving the torpedoing of the HMS Nabob in August 1944. Following an honourable discharge from military service, he married his sweetheart Helen in 1946, and settled in St. Boniface, Winnipeg, where he built his family home and worked as a public servant for the Manitoba Government. In his retirement, John enjoyed puttering in his yard, travelling with Helen to California, Florida and Hawaii, many cruises and spending time with his extended family.
Special thanks to the wonderful nurses and aides who provided care in his home, especially JJ and Tim. Deep gratitude to the wonderful nurses and staff at Actionmarguerite St. Boniface 4 DE who treated him with love, kindness and respect in his final days.
A service will take place at Desjardins Funeral Home, 357 DesMeurons St., Winnipeg on March 13, 2020, at 1:00 p.m., followed by a private interment at St. Boniface Cemetery in June 2020.

Family and friends may sign a
Book of Condolence at
www.desjardinsfuneralchapel.ca.