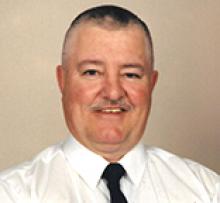 It is with extreme sadness, that we announce the passing of Kenneth E. Kahle on March 18, 2020.
Kenneth was predeceased by his parents, Jessie and Edward Kahle, his sisters, Margaret and Helen and his brothers, Stewart and Jack.
Ken was employed by Abitibi Price and worked for 37½ years, retiring in February of 1996. While working for Abitibi, Ken was the Financial Secretary of the Union for over 20 years, and he enjoyed part-time bartending at socials and the Pine Falls Curling Club for over 25 years. Ken's passion was geography; he delighted in conversations with perfect strangers asking where they were from and then naming every city and town close to where they were born.
Ken leaves behind his wife Doris of 58 years; daughter Karen (Brent) Robertson, grandchildren, Jullie, Jennifer and Branden; daughter Kristen Kahle (Neil Boulette), granddaughter Courtney; brother-in-law
Hans-Ulrich Dieke and family; sister-in-law Margaret (Michael) Harris and family. Missing Opa will also be his three amigos; Daisy, Buster and Mr. Muckie.
A family and friends gathering will take place at a later date.