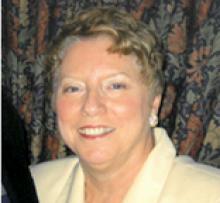 It is with heartfelt sorrow and sadness we advise the passing of a truly beautiful woman who was unsurpassed as a wife and mother.
Judy is survived by her husband of 53 years, George, and sons, Jeffrey of Vancouver and Christopher (Liz) of Sydney, Australia; three grandchildren, Chloe, Ethan, and little Elle, all of whom she missed because of the great distance between Canada and Australia. She would have given almost anything for a hug and kiss from the kids.
Judy is survived by her sister Linda Adams of Vancouver, brothers, Wayne Snow (Lynette), Brian Snow (Debbie) and Mark Snow (Jamie). She is also lovingly remembered in the prayers of brothers-in-law, Robert (Val) and Albert, sisters-in-law, Evelyn Marquardt (Ron) and Linda Coyle (Noel). Judy was predeceased by her father William, mother Edith (nee Graham), and younger sister Janette (Richard) Thompson.
Judy's family of four followed George's career moves from Winnipeg to Ottawa and many points between until retirement from RBC in 1995. Our little troop relocated back to the familiar surroundings of Manitoba. Shortly after settling in Winnipeg, Judy decided to try a career as a jeweler and she found something she loved to do. As an extrovert Judy did well at her newfound career which she devoted herself to as she did with everything, nothing halfway for Judy. She formed many good and lasting friendships through her business dealings.
Judy's family and grandchildren gave her pride and joy, and her greatest regret was the distance separating her from the ones she loved so dearly. Judy's love for her family was the glue that held everything together.
Judy loved travelling, which we did frequently with brother-in-law Robert and his wife Val. Her favourite place to visit was anywhere in Europe. She has many scrapbooks filled with pictures and information on the places we visited.
Judy never did anything half measure, she put 100% of herself into everything she did. She loved people, she made many meaningful lasting friendships. She was a longtime member of Beta Sigma Phi - Preceptor MU.
Judy's faith in God was strong and unwavering. She will certainly make it through the Pearly Gates where many are waiting to greet her.
The family wish to express our sincere gratitude for the quick response of the WFS and Paramedic Service, the St. Boniface ER Department and ACCU, as well as several years of cardiac care given by Dr. Tam and his receptionist Ana at the Bergen Cardiac Clinic. There are many individuals that Judy would reach out to and thank. If you were a friend or acquaintance of hers, please keep her in your thoughts and prayers.
Due to the current global conditions, Judy has been cremated and no service is planned at this time. It is possible some memorial may take place in the future.
If anyone wishes to make a donation in Judy's memory, she would have preferred the Heart & Stroke Foundation.