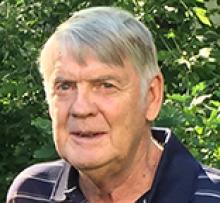 With heavy hearts we announce the peaceful passing of our dear Lawrence, after a courageous battle with Parkinson's disease.
He was born and raised in the Bradford, Ontario area. From there he moved to Winnipeg with his young family, to begin his long and successful business career. Eventually he was fortunate enough to have his own business.
If he was asked, he would say his greatest treasure was his family.
He is survived by his loving wife Carol; his daughter Lorie McGregor (John); his son Greg (Maria); and his extra daughters, Lori Black (Dave Jopling), Janet Black (Doug Orr) and Karen Black (Brian Cork); as well as his brother Bill (Donna); his sister Muriel; and their children.
He will be greatly missed by his grandchildren, Trevor (Katrina), Michael, Matthew, Jared, Madison, Ally, Jessica (Jason); and three great-grandchildren. He treasured each of them dearly and never missed an opportunity to spend time with them.
Lawrence was always up for an adventure, whether it was a game of euchre, a hike in the desert, or a winery tour through Australia. He had a perpetual smile and a twinkle in his eyes, to go along with his own unique sense of humour. He was a strong willed man which aided him in his battle with Parkinson's disease.
Lawrence had a special way with people. He was a sensitive, kind and patient man. His circle of friends extended far and wide. We will miss him immensely, but we carry him in our hearts and memories.
There will be no formal service. We will gather at a later date for a celebration of his life.
Thank you to all the healthcare providers who took such good care of him, especially during this difficult time for everyone.
In lieu of flowers, donations can be made in his memory to Parkinson Canada (see website), or the Beausejour Hospital TV Fund, care of the Beausejour Health Centre.