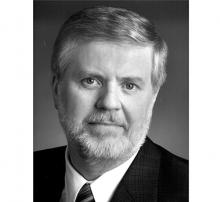 It is with deep sadness our family would like to announce that on Sunday, April 12, 2020, after a short battle with cancer, Ken passed away peacefully at the St. Boniface Hospital in Winnipeg, at the age of 65.
Ken is survived by his loving wife of 42 years, Charlene, son Brent (Sarah) and daughter Tracy (Mike) Martin. He was grandpa to Anna, Emma, Andrew, Hailey and Carly who were the light of his life. Also mourning his loss are his brother Ed (Judy) of Calgary; brothers-in-law, David (Joan), Dennis (Cheryl) and Paul (Sharon); numerous nieces and nephews and their families. He was predeceased by his parents, Don and Joan.
Ken grew up in Fort Garry where he attended elementary, junior and high school. He went on to attain a Bachelor of Commerce degree from the University of Manitoba and became a Chartered Accountant while articling with Price Waterhouse. In 1980 he moved to Wawanesa Insurance holding various management positions in both the Life and Mutual Insurance Companies. He retired as President and CEO in June of 2014 after 34 years with a company that he was most proud of. In recent years, Ken became a member of the Board of Directors of Habitat for Humanity Manitoba, realizing the very important work they do in our community.
Ken was always an active individual. In his younger years, he played hockey and baseball at the Westridge Community Club and curled for many years at the Pembina Curling Club. Ken loved to spend time at the family cabin in "sunny Woodridge" snowmobiling and quadding with family and friends, or just sitting on the deck reading a good book with a glass of scotch. He always had time to drive his grandkids to the store on the rhino to look for trains ("choo-choos") and to get treats! His favourite thing to do was be a grandpa; he had a quiet love for each of his grandkids. Ken enjoyed travelling whether by car, train, ship or plane. Most recently he and Charlene took a driving trip through England, Ireland and Scotland with Ed and Judy. Ed the driver, Ken the navigator - what a ride! He liked organizing and planning the trips as well, always planning the next trip before leaving on the first. He and Charlene loved to cruise whether alone or with family. He was a huge NASCAR fan and attended many races, some with former co-workers and business associates who became valued friends.
Our family would like to extend our heartfelt thanks to everyone at CancerCare Manitoba, the Health Sciences Centre, and the St. Boniface Hospital who took care of Ken's needs over the past two months. We would also like to thank the many family and friends who kept him in their thoughts and prayers as well.
In lieu of flowers, if you wish, donations can be made to Habitat for Humanity Manitoba, 60 Archibald Street, Winnipeg, MB R2J 0V8 or to a charity of your choice.
In light of recent world health events a celebration of Ken's life will be held at a later date. Details will be published in this paper. We hope you will be able to join us at that time.