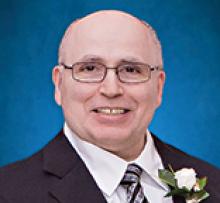 It is with sadness that we announce the passing of Gilbert Albert Joseph Balcaen in Winnipeg on April 11, 2020 at the age of 63. Surrounded by his family, he died peacefully from complications related to his quadriplegia caused by a car accident in 2006.
Fond memories of Gilbert will be cherished by his beloved wife Gisèle (née Desharnais); his children, Roxanne (Miguel), Janelle (Christian), Francine (Dale) and Joël; his grandchildren, Estelle, Margot, Félix and Loic, his brothers and sisters, Raymond (Karen), Nicole (Pierre), Ginette, Gisèle (Raymond), Denis (Pam) and Suzanne (Fernand), as well as many other family members and friends. He is reunited with his late parents, Fernand and Georgette (née Rocan), as well as his late brother Roger.
Gilbert grew up in La Broquerie, Manitoba, where he worked as a dairy farmer for many years. He had a sociable and generous nature and was very involved in his community. He had been an active member of the Knights of Columbus as well as the president of the Fédération provinciale des comités de parents and the Council of Economic Affairs of St. Joachim Parish. For several years, his lovely tenor voice could be heard in the parish choir and he was sought out to be master of ceremonies at various community events. He did not shy away from hard work and liked to set big goals for himself, such as running a half marathon at an impressive speed and cycling 900 kilometers in Kenya for which he raised funds and found sponsors for several orphans. After his spinal cord injury, he beat the odds and managed to walk short distances with a cane.
Gilbert valued his Francophone heritage, was a proud Bombers fan and never turned down a good piece of chocolate! He was very devoted to his family. His wife, children and grandchildren knew they were loved. Those who crossed his path certainly noticed his positive energy and exuberant laugh. He leaves an imprint in each of our hearts as being a good and loving man.
The family would like to thank the staff at Foyer Valade in Winnipeg for their excellent care and dedication to Gilbert over the past five years.
A funeral service will be held at St. Joachim Church in La Broquerie, Manitoba, as soon as pandemic conditions permit.

Family and friends may sign a book of
condolence online at
www.desjardinsfuneralchapel.ca.