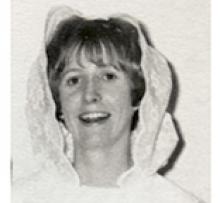 On May 1, 2020, Bonnie Edkins passed away at the Pinawa Hospital. She fought a courageous battle and is finally at peace but is dearly missed by her loving husband Douglas Edkins and all her family.
She is survived by her children, Kinnon Tkach (Colin), Krista Edkins Lambert (Darren), and Gregg Edkins (Kana); her eight grandchildren, Kailey, Kira, Terrin, Gage, Wyatt, Reed, Sumire, and Ayano; her siblings, Brenda Rand (Bruce), Bob Mitchell (Carol), Marlene Lewis (Lorne), and her numerous nieces, nephews, and in-laws.
Bonnie was preceded by her parents, Winnifred and Robin Mitchell; and niece Shantelle Lewis.
Bonnie was born in Winnipeg, MB, on August 21, 1942.
Bonnie graduated from the University of Manitoba with a Bachelor of Science and a Bachelor of Education. During her studies, Bonnie became the Lady Stick of the Science Faculty which was one of her many achievements at the University.
After graduation, Bonnie travelled for a year in 1960s to 23 European countries with friends. On June 21, 1968, she married Doug Edkins and they remained married for over 50 years. She started her teaching career coaching and teaching at a few schools including her first two years in Flin Flon, and then West Kildonan Collegiate and retiring from Nelson Macintyre Collegiate in 1997. Upon retirement Bonnie and Doug moved to Pinawa, MB, where they continued to travel to 17 more countries and enjoyed spending time with their grandchildren, playing bridge, curling, and golfing.
Bonnie was a strong, independent role model for her children, grandchildren, and students. She will be greatly missed.
The family wishes to thank the community of Pinawa for their support in this difficult time.
In lieu of flowers, please consider making a donation to the charity of your choice.
A Celebration of Life will be held at a later date.