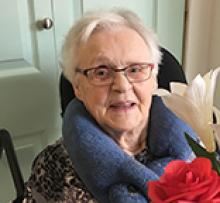 It is with great sadness we announce that Betty Doreen Ruth - mother, grandmother, aunt and friend, has left us to be reunited with her husband Warren Ruth, who predeceased her in 2013.
Betty was born in Plymouth, England and came to Canada at the age of four. She grew up in Stony Mountain, Manitoba. She met Warren after the Second World War and they were married in 1945. They lived in East Braintree, Stead, Winnipegosis, Winnipeg, Stony Mountain and retired in Sidney, MB. After Warren passed in 2013, Betty moved to Lindenwood Manor in Winnipeg where she enjoyed assisted living for five years before moving to West Park Manor.
Betty's passions included decoupage, ceramics, sewing, including round dancing outfits, PJs and Halloween costumes for her grandkids. She loved her rose and lily gardens, canning, baking and cake decorating. She loved to travel (especially cruises), dance, play cards and share her secrets for making homemade bread and cinnamon buns.
Betty and Warren welcomed all into their home - strangers, friends and family alike. They were generous and accepting of all with no judgement, never turning away anyone in need. Betty loved to cook, to every guest's delight. They deeply touched all who were in their lives.
Betty was predeceased by her brothers, Jack, Harold, Charlie and Don Maple, and her sister Joan Mewes. She leaves behind her children, Raymond, Douglas (Bev), Bonita (Wayne) and Dennis; nine grandchildren, Shanna (Mark), Kim, Jason (Trish), Chelsea, Nicole (Chris), Kirstin (Stephan), Whitney (Mark), Alex and Jenny; eleven great-grandchildren, Dustyn, Kaitlyn, James M., Oliver, Madison, Paetan, Liberty, Justyce, James R., Knox and Eddy; one great-great-grandson Beau, as well as many nieces and nephews.
The family would like to thank the staff of West Park Manor for their care and compassion.
In lieu of flowers, please make a donation to West Park Manor Personal Care Home Inc., 3199 Grant Ave., Winnipeg, MB R3R 1X2.
Cremation has taken place. Betty and Warren will be buried in the Sidney cemetery in Sidney, Manitoba at a later date.