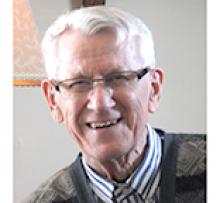 Len passed away peacefully to spend eternity in Heaven with his wife Madelene, who preceded him in June, 2019.
Memories of Len are cherished by his daughter Janelle Peterson (Brent), grandchildren, Lauren and Joel; son Craig Doerksen (Cathy), grandchildren, Jennifer and James. He is survived by two of his nine siblings, older brothers, Herman (Mae) and Tony Doerksen, and brother-in-law Barry McGhie, and numerous nieces and nephews.
In his teens, Len committed his life to Jesus. In 1955, he met his sweetheart Madelene Colburn in Calvary Temple choir. They were married in 1959 and continued their lifelong involvement in church ministry. He served as the volunteer Manitoba Director for World Vision in the 1970s and supported numerous other organizations.
He hit his sweet spot when he started his own business in 1975, Doerksen Medical Gas Systems, eventually serving hospitals coast to coast across Canada and the US.
Len was always there for his grandchildren, whether at special church events, school music concerts, baton, football and basketball games and birthday gatherings.
After 25 years they sold the business. Retirement living included the condo as home base while Mesa Arizona was the winter home and Manhattan Beach was their summer retreat.
While dementia began to show in Len's memory in 2015, it never touched or changed his care, compassion and love for people. He was able to know his family and his love for God. When visits led to Scripture reading, hymns or gospel songs, Len's mind was in alignment with the Spirit of God within him. Words to songs, meaningful scriptures and the ability to pray and praise the God he had known since his teens came without hesitation.

Due to provincial restrictions, a family graveside service was held.
For those wishing to, they may donate in Len's memory to the Alzheimer Society.

This obituary and link to a video tribute can be found at greenacresfuneralhome.com.