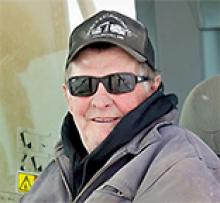 With a heavy heart we announce the passing of Mervin Richard Walkoski on May 19 2020, at the age of 81, after a courageous battle with cancer.
Merv is survived by his loving wife of 61 years, Patricia Walkoski (Bauder), son Donald (Marilyn), daughter Valerie (Mike), grandchildren, Sheldon, Breanne, Kyle, Dorota, Ryan, Daniela, Michael, Kristen and Amberleigh, great-grandchildren, Arianna, Hunter, Kinley, Zack, Addisyn, Aerynn and Mykle, sisters, Louise and Linda, and brother Morley.
He was predeceased by his parents, son Leslie, and infant son.
Merv was born on December 24, 1938, to Michael and Evelyn Walkoski. After time on the oil rigs in Alberta and diamond drilling, he spent a number of years farming in Birch River. In 1969 he packed up the family and moved to Churchill, Manitoba, where he worked as a mechanic and heavy equipment operator. In the late 1970s he decided to start his own company which would become what is now Merv's Excavating.
Merv was a kind and loving man who always gave of himself. If anyone needed help he was always there to lend a hand. He worked long hours whether it was plowing snow at 4:00 a.m. or crushing gravel until 12:00 midnight. Merv instilled a great work ethic in his son which he passed on to his three sons. Merv was very humble and a man of few words. He was always his happiest when operating one of his "toys" (equipment). In his younger days he enjoyed snowmobile racing and building the "first" tundra buggy with his buddies.
His love for Churchill and its people is known by all.
In lieu of flowers, please donate to Children's Hospital Foundation of Canada.
Celebration of Life will be held in Churchill at a later date.

Paull Funeral Home and Crematorium
is honoured to have served the family.