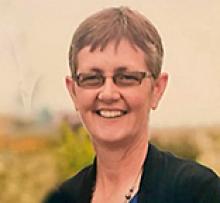 Donna passed away on June 3, 2020, at home, surrounded by family.
Donna was born February 28, 1961, in Selkirk, MB, to parents Frank and Yvonne Anderson. She was the second oldest of four children. As her father worked construction jobs all around Manitoba, the family spent her early years travelling and living in many different towns. The family returned to Austin in 1965 to live with relatives. It was there that the family got into the cattle business.
Donna attended elementary school in Austin. At age 12, her family moved to Carberry in 1973. After graduating from Carberry High School in 1979, Donna got her first and only off the farm job hauling potato waste from the Simplot plant to Carberry Feeders. Later, she joined her father and other family members in the business of feeding cattle.
Donna met Peter Pingert in 1984 when he came to haul a load of cattle from the family feedlot. They were married March 28, 1987, in Mesa, Arizona, in the presence of Peter's parents, Albert and Louise. In the early years the couple enjoyed several road trips to the USA. Their first year of marriage was spent in a house trailer in the village of Sidney, before moving it to the family farm in 1988, where they worked together with her family. Daughter Whitney was born in 1991, followed by Layne in 1995 and Alexis in 1997. In 1997, they built a new house at the family farm, moving in three days before the birth of daughter Alexis.
Peter and Donna operated a feedlot together and fed Holstein steers until 2006. They then bought and fed feeder calves for a few years until they switched to cull cows. Throughout the years the farm consisted of cattle, horses, mules, goats, sheep and donkeys. In the last year Donna was excited to see the addition of four mini donkeys and some Muscovy ducks at her daughters' persistence. Donna loved the farm and more often than not could be found outside working, driving the loader or running other equipment. Due to a runaway pony in her childhood you would never find her on a horse, but she put up with Peter's (and later the girls) rodeos and team roping, sometimes travelling along. She was more than capable running the feedlot alone for four winters while Peter was in Arizona with his horses.
Donna was a member of Christ Church in Austin and faithfully attended church. She also participated in the Walk for MS annually for over the last 20 years, many times claiming the status of top fundraiser for the Brandon walk. Before the girls were born she was very interested in genealogy and spent hours doing research and collecting data on family, including trips to cemeteries around the province. Donna faithfully kept a diary everyday since she was a young teenager, with daily happenings and weather. She loved country music, the radio was always on, and she attended many concerts over the years, even taking in two trips to Dauphin Countryfest with daughter Whitney.
Donna loved to read, garden, and take photos but her biggest passion was buying and feeding cattle. After the girls were all in school, she started making weekly trips to several different cattle auction marts. She spent many hours at local auctions, estate and yard sales, and thrift stores and would drive a long ways for a good deal.
Donna was proud of her girls and encouraged them to be strong, independent women who could do anything they set their minds to. As a perfectionist, she believed any job worth doing was worth doing well. She was also an optimist who always tried to see the glass as half full.
Donna will be missed by her loving husband, Peter; daughters, Whitney, Layne and Alexis. She also leaves to mourn parents, Frank and Yvonne Anderson; siblings, Trieste (Ken Bird), Reid (Judy) Anderson and Leanne Anderson.; mother-in-law Louise Pingert of Ogema, SK; brothers and sisters-in-law, Linda (deceased) Bob Dunn, Gordon (Anne) Pingert, Patty (Brian) Wiles, Eric (Lynn) Pingert; as well as aunts, uncles, and nieces and nephews.
A private family interment will take place at Austin Cemetery on June 6, 2020, with Rev. Chris Evetts officiating. A public Celebration of Life will follow at a later date.
In lieu of flowers, charitable donations would greatly be appreciated to the MS Society, 302 Saskatchewan Avenue E., Portage la Prairie, Manitoba R1N 0K8.