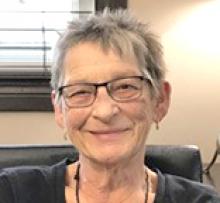 With broken hearts we held her hand and said goodbye on May 29, 2020, following a battle with terminal cancer.
Left to treasure her memory are son Kevin (Heather) Deibert, daughter Nancy (Rob) Drysdale, grandchildren, Ian, Sarah and Taylor, as well as extended family and friends. Edna was predeceased by her parents, Bertha and Vernon Mouck, husband of 52 years, Gerald (Jerry) Deibert, brother Ernie Mouck, and in-laws, John and Eva Deibert, Hank Elder, Lucy Mouck, Gilbert Deibert and Joyce Bergman.
We honour and remember a generous, caring, clever and gentle soul. More comfortable behind the scenes than in the spotlight, she was our maker of treats, spoiler of loved ones, nurturer and biggest supporter.
Edna was born and raised in Dauphin, MB. During high school she moved with her family to Edmonton, AB for a brief stay before striking out on her own. In 1961, at the tender age of 19, she married Jerry Deibert in Saskatoon, SK where they began their life together. She became a mom in 1962 with the birth of Kevin.
As a young wife and mother Edna lived for a short time in Nanton, AB, and here welcomed their daughter Nancy in 1965. Following a short stay in Shellmouth, SK they spent seven years in Gillam, MB where she enjoyed the camaraderie and friendships borne of life in an isolated northern community. In 1974 the family moved to Winnipeg. Edna worked for many years in administration at Woolco in St. Vital Mall. Many fond memories were made on family road-trips, and holiday time spent in Gilbert Plains, Saskatoon and Moose Jaw with extended family.
Throughout her life Edna demonstrated a quiet strength and can-do attitude, with a stubborn streak that helped push many projects to completion. At home, gardens and flowers were planted and tended, things were sewn, crafted, knit, cross-stitched, wallpapered, permed, pickled, cooked and baked, and sometimes burnt - in that damn oven. She enjoyed a good laugh, and with a glint in her eye, appreciated a bit of cheekiness. Her needs and wants in life were modest, and she found joy in nature and simple pleasures. Hours of Bridge, Yahtzee, Scrabble, Thirty-one and various word games were played.
In 1995 Edna happily welcomed daughter-in-law Heather, and son-in-law Rob to her family. Her heart swelled with love in 1997, 1998 and 2001 with the birth of each grandchild, and she set about building traditions and special bonds with each of them. She put others first, and never was this more evident than during the 20 years she spent as ally and caregiver to Jerry through his declining health; seldom and reluctantly asking for help. Though their travel capacity was limited, together they made lasting memories on a bus excursion through the States, camping adventures with Fran and Rosalie, and several mini getaways. In her 70s, recently widowed and living alone for the first time, Edna relearned to drive, got an iphone and embraced a new-found independence. She discovered a love for travel and delighted in trips to Palm Springs, the east coast of Canada, Phoenix, and the San Diego area, the last trip shared with both her kids in January 2019.
In keeping with Mom's wishes cremation has taken place and the family will gather for a private interment.
Our sincere gratitude to Palliative Care Manitoba (nurse Shawn) for the compassionate support Mom received while at home, and to Riverview Palliative Care for caring for Mom in her final days when we could no longer do so.

Family and friends may sign an online
Book of Condolences at desjardinsfuneralchapel.ca