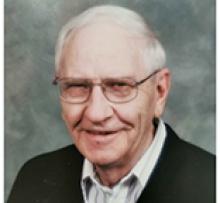 With deep sadness, we said goodbye to our Dad, Bill Ellard, when he passed away on June 22, 2020 at the Riverview Health Centre.
Left blessed with his memory are his son Ryan (Shannon), daughter Leanne (Dave); grandchildren, Bryan (Erin) Katelynn, Patrick (Alana), and Libby as well as his great-grandchildren, Jordyn, Austin, Carson, and Xavier.
Bill was predeceased by his loving wife Gail, in 1981, his Mom and Dad, two brothers, and four sisters, as well as his dear friend and companion, Winona. He is survived by his sister Bernadette Covey.
Dad was born on the family homestead in Biggar, Saskatchewan in 1933. He shared many memories of riding his horse to school, having his big sister Edna teach his class, and his lab named Rex.
Dad married Mom in 1959 and began his family with Ryan then Leanne. In 1967, we moved to northern Manitoba finding adventure and community in Gillam where Dad began his 26-year career with Manitoba Hydro. We have wonderful memories of fishing, sledding, hockey, curling, and braving the black flies within the tight-knit community. In 1974, we moved to Winnipeg where he continued his career at Hydro until retiring in 1993.
Dad was a cautious adventurer. In the early 1950s, he drove to Las Vegas, Nevada and Tijuana, Mexico before such vacations became popular. His souvenir sombrero always had a place on the wall and he played his Tijuana Brass records for decades afterwards. He kept that adventurous spirit when he bought the land in Inwood and cared for horses, farmed trout in the slough, and grew alfalfa. Once retired, he discovered New Mexico and made it a winter destination for several years. Although open to adventure, he needed to ensure everyone was being careful.
Losing Mom was devastating to Dad but he managed to stay strong and be there for his children and grandchildren as they began to arrive. His family was important to him and he always took the time to ensure everyone felt special.
Dad found love again with Winona and they enjoyed 20 years together spending time with family, friends, travel, and provided years of dedicated staffing for Kitty.

He was loved and will be missed dearly.

Cremation has taken place and the family will gather for a private interment where he will be laid to rest beside Mom.
The family would like to express our appreciation to the staff at Riverwood Square where he lived for over two years and was cared for dearly. Additionally, many thanks to the staff at Heritage Lodge where he was cared for before moving to Riverview Health Centre. Our hearts, along with tremendous gratitude, go to the staff at Riverview who showed exceptional care and compassion for him, and us, during his last days.
In lieu of flowers, please share a fun story with your loved ones about Dad, show a kind gesture to a senior citizen, or make a donation to the Alzheimer Society of Manitoba.