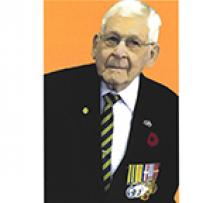 On June 27, 2020, after a long and courageous battle with cancer, Wietse Jack Lubben passed away at St. Boniface Hospital, at the age of 91 years.
He is survived by his loving wife of 59 years, Marielle, brother Harm, brother-in-law Edgar Daigneault (Madeleine), sister-in-law Jocelyne Tougas (Louis), and many nieces and nephews.
Jack is predeceased by his parents, Harm and Roefina Lubben; his siblings, Philip (Ethel), Folgert (Valda), George, Jenny Huntley (Bill), Christine Berard (Reginald), Margaret Whitfeil, and Laura Kargus (Lloyd).
Jack was born on February 19, 1929, in Port Hope, Ontario. At the age of 18, he enlisted with the Canadian Armed Forces. He spent the next 30 years in service for his country, which included serving in the Korean War, as well as two tours of duty in Germany with NATO. He was also stationed in Kingston, Downsview, and finally Winnipeg.
In 1960, Jack married the love of his life Marielle Daigneault in her hometown of Ste. Anne, Manitoba. They spent the next 59 years together.
Jack was an avid reader his entire life. He also enjoyed woodworking and playing cards. He volunteered his time as a scout leader at the Parish of Saint Bernadette.
Throughout his extended illness, Jack never complained and always had a positive outlook. He was a good husband and a good man. He will be deeply missed.
Funeral Mass will be celebrated on Saturday, July 4, 2020, at St. Bernadette Parish, 820 Cottonwood Road, at 11:00 a.m. Interment to follow in Glen Lawn Memorial Gardens, 455 Lagimodiere Boulevard.
Donations in Jack's memory can be made to CancerCare Manitoba, 675 McDermot Ave., Winnipeg, MB R3E 0V9, 204-787-2197.