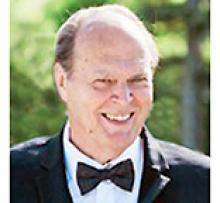 It is with heavy hearts we announce the peaceful passing of our beloved Colin, who lost his life after a long and courageous battle with cancer. He was 73 years of age.
Colin is survived by his loving wife of 51 years, Monique (nee Bernardin), his daughter Christa, son-in-law Scott, and grandson Luke. Colin was predeceased by his parents, Wallace and Agnes Vann, his brother Russell Vann, sister Beryl Bailer, nephew Christian Caron, along with his fathers-in-law, Raymond Bernardin and Charles Balmer. The Vann family members who are left behind to cherish his memory are: sister-in-law Judy Vann and her children, Russell, Laura and Linda and their families; nephews: Dan Bailer; David Bailer (Shari) and their sons, Kyle, Scott and Max; and Andy (Bobbie) and their daughters, Chloe and Daphne. On the Bernardin side, the in-laws (or outlaws as Colin would lovingly refer to them as), his mother-in-law Valentine Bernardin, Raymond Bernardin (Barb), Charles Bernardin (Giselle), Albert Bernardin, Mercedes Caron (Ron), Roland Bernardin (Sandy), Yves Bernardin (Deane), Christiane Charpentier (Dan). There are many nieces and nephews on both sides who will miss him dearly.
Colin was born in Winnipeg, Manitoba in April of 1947. His father was a fireman and his mother was a nurse which had them moving over the years; Colin's favourite area was Elmwood. Colin studied civil engineering and graduated from MIT (Red River) in 1967. Throughout the early part of his career he was employed by engineering firms that had him travelling all over Canada. With dreams and ideas of his own, in 1976 he established Vann Mechanical Services and together with his partners later created Arctic Foundations of Canada Inc. and Encompass Inc. Having the huge heart that he did, he adored his employees and considered them family.
On a blind date in 1966, Colin met the love of his life, Monique, and they were married on June 27, 1969. In November 1973 the young couple purchased Monique's grandparents' acreage in Elie and in August of 1974, they welcomed their daughter, Christa.
Colin was a devoted member of the town of Elie. He was the driving force behind the establishment of the Elie Chamber of Commerce and the LUD board that manages the affairs of the town of Elie. Along with other dedicated community members Colin worked to create Elie's first newspaper, the Cartier Chronicle (1991) which continued until 1998 when the Headingley Headliner took over local news. Being progressive, he worked with other community leaders to create the White Horse Plain Community Network, which was the first time the RM of Cartier residents could access the internet. Passionate about his community, Colin was proudly elected Reeve of the RM of Cartier from 1998 to 2002. During his time as Reeve he enjoyed his interactions with staff, council and took extra pleasure in challenging the administration wherever necessary to push for positive change. Through community curling he developed lifelong friendships with Rene Gillis, Irvin Rice, and Fern Gervais.
Colin was a brilliant man but recognized that a happy life is made of simple pleasures. He was an avid reader, an enthusiastic hobbyist and an animated joke teller. He liked watching black and white films and working on his 1935 Hudson Terraplane. If anyone asked when the car would be finished, he would simply tell you "on Tuesday".
Without question, Colin was a family man and enjoyed living in close proximity to his family members, always there to lend a helping hand or sit for a coffee. He also looked forward to trips with Monique to visit his brother Russell and sister-in-law Judy in Walnut Creek, California. He drove Monique wherever she needed to go and spent most of his free time at home. Colin enjoyed a close relationship with his daughter Christa and eventually his son-in-law Scott (whom he cherished) and was a devoted grandfather to Luke, being sure to spend time with him every day.
Honorary pallbearers are Dan Bailer, David Bailer, Andy Bailer, Todd Carriere, Dan Bouchard, Brad Horning, Richard Roy, Gerry Arnal, Charles Bernardin, Albert Bernardin, Yves Bernardin, Ronald Caron, Daniel Charpentier and Scott Mitchell.
With gratitude to the compassionate and kind staff at Health Sciences Centre CancerCare, Health Sciences Centre Stem Cell Unit, the Victoria Hospital CancerCare, Portage General Hospital CancerCare (Medical Ward 2), Cartier Health Centre, and Dr. Gray.
In lieu of flowers, please consider donating to a charity of your choosing. In the spirit of Colin's service to others, consider earmarking June 30 as a day to honour Colin's life with a random act of kindness.
Due to COVID-19 restrictions and health concerns, the family will be honouring Colin's passing with a private service.


Dad, rest easy knowing you filled our lives and our hearts to the brim, you were our best friend - this is not good-bye, we will see you again. Xoxoxoxo