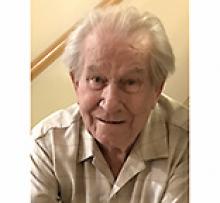 It is with great sadness that the family of Heinz von der Behrens announces his peaceful passing in the early hours of July 11, 2020, after a short battle with cancer.
He leaves to cherish his memory his son Dieter (Debbie), grandsons, Erik (Caroline) and Kris (Kristal), great-grandchildren, Colin and Kate, and numerous relatives in Germany. Heinz was predeceased by his wife of 61 years, Ursula, and his two older sisters, Sophie and Anneliese.
Heinz was born on November 3, 1928, in Osterholz Scharmbek, Germany. He started his working career as a miner in the coal fields of the Ruhr Valley. Heinz met Ursula on a blind date, and it was love at first sight. They were married in 1951, and Dieter arrived a year later. In search of a better life, the family immigrated to Canada in 1957. Upon arriving in Winnipeg, Heinz was unable to find work as a miner, so he went back to school to become an apprentice in the carpentry field. He was awarded his Red Seal four years later. He spent the remainder of his career in the construction industry, employed first by Peter Leitch Construction and then Lakeview Developments, until he retired in 1991. After Ursula's passing, he moved to Devonshire House where he made many strong friendships.
Heinz was devoted to his family, and he showed his love for us in countless ways. He was so proud of everyone's accomplishments and looked forward to Sunday dinners when we were all together. Even in his final days, his only concern was for his family.
The family would like to thank the staff at the Grace Hospice for their care and compassion during Heinz's final days.
Due to Covid-19, a private graveside service will be held on Friday, July 17, with interment at Green Acres Cemetery.