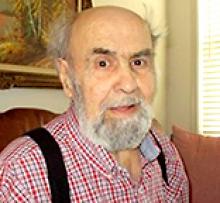 It is with great sadness that we announce the passing of Evangelis 'Val' Koulouriotis on July 24, 2020.
Val was predeceased by his dear wife Sophie and his feline friend Meli. He leaves behind his daughter Joanna, son Alexander (Sheila), numerous nephews, his beloved granddaughter Sheyne, and great-grandson Sterling.
Born in Greece, Val moved to England as a teenager, where he developed his lifelong love of roast beef and Yorkshire pudding, his steadfast refusal to refer to soccer as anything other than 'football', and his rather good Sean Connery imitation. A few years later, Val immigrated to Canada, residing in British Columbia before finally settling in Winnipeg. In Winnipeg, he met his future wife Sophie and became co-owner with his brother-in-law in the restaurant that would later become known as VJ's Drive Inn.
Val was a keen gardener, taking pride in his beautiful flower and vegetable gardens and, in later years, he loved tending to his numerous balcony planters of flowers and tomatoes.
Towards the end of his brief battle with cancer, Val was at peace and wished to join his dear Sophie.
Funeral services will be held at Desjardins Funeral Home, 357 Des Meurons Street on Wednesday, July 29, 2020, at 10:00 a.m. Interment will follow at Glen Lawn Memorial Gardens, 455 Lagimodiere Boulevard. Mourners are asked to wear a splash of colour as Val found plain black too dreary. Please avoid wearing red or green, though - unless you'd like to share in one final laugh with Val.
Due to restrictions on public gatherings, please RSVP to the service by phoning 204-233-4949.
In lieu of flowers, donations may be made in Val's name to CancerCare Manitoba or the Kidney Foundation of Canada.

Family and friends may sign a
book of condolence at www.desjardinsfuneralchapel.ca.