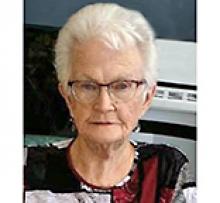 With family by her side, Olive Mary Wanless (nee Weedmark) of Wawanesa, MB, passed away at the Wawanesa Personal Care Home on Wednesday September 9, 2020, at the age of 93 years.
Olive was born February 2, 1927, the fourth child to a family of eight of Alton and Eva Weedmark. She married Gregor Maxwell "Mac" Wanless on July 23, 1947, and raised one child Greg. Mac and Olive farmed in the Belmont area for a number of years, and also operated the "Belmont Transfer", later taken on by their son, Greg.
In 1974, they moved to Wawanesa. After Mac passed away in 1982, Olive remained in Wawanesa, and later on resided at the Wawanesa Personal Care Home until her passing.
Olive loved to go to church and coffee in the morning with her friends. She enjoyed bingo and the odd trip to the casino. She loved her family, and cherished her community and her many friends.
Olive leaves to mourn her passing her son, Greg Wanless of Brandon, MB; granddaughters, Tracey (Danny) Kozak of Wawanesa, MB, and Loretta Wanless of Wawanesa, MB; four great-grandchildren, Brooke (Joe), Skylar, MacKenzie (Derrek) and Grayson; and by two great-great-grandchildren, Emery and Ryker.
She is also survived by her brother, Wes Weedmark of Belmont, MB; sister, Helen (Bernie) Yaworski of Regina, SK; as well as numerous extended relatives and friends.
Olive was predeceased by her husband, Mac (1982); mother, Eva Weedmark (nee Porter) (1952); and father, Alton Weedmark (1968); sisters, Clara Weedmark, Nettie Weedmark and twin Neta (Jim) Gordon, Florence (Lewis) McLean and Myrtle Weedmark.
A private family graveside service will be held on Saturday, September 12, 2020, at the Hillside Cemetery, with friend, Dianne Hill, to reflect on Olive's life.
Friends that so desire, memorial donations can be made in Olive's memory to the Souris River Recreation Commission, c/o R.M. of Oakland Wawanesa, Box 28, Wawanesa, MB R0K 2G0.
The service will be available to view online at www.willmorchapel.com later in the day.


Friends may sign the memorial
register book by emailing
jamiesonsfuneralser@mymts.net
or call 204-526-2380
and we will insert your name.

Condolences may also be submitted
by visiting the website at
www.willmorchapel.com.

Jamieson's Funeral Services
of Glenboro in care of arrangements.