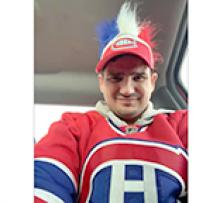 Junior was born May 3, 1975, in Portage la Prairie, MB.
Junior leaves to mourn him, mom Georgina (Don) and his dad Phillip Houle Sr.; his special friend Carlene Campeau; his brother Neil (Glenda) and sister Georgette; his children, Alyssa, Christopher, Austin and Storm; his grandchildren, Asia, Alvarado, McKenzie, Malikai, Dominic, Aliyah, Iris, Rose, Jayven and Deanna; his nieces and nephews, Jordan (Brenden), Danielle, Taylor, Lennon, Danis (Miguel), Nathan (Angela), Emma, Alexis, Rayden, Mikey, Gracie and Electra; his uncles, George (Debralee), Joevine (Sandra), Morrie (Josephine), Wayne, Ralph (Marlene), Dave; and his aunties, Kathy, Sandra, Karen, Loreyann, Eileen, Barbara, Evelyn (Johnny), Darlene, Judy and Laura (Jimmy) Betty.
Junior had a very unique relationship with his uncle Joevine and his wife Sandra, he considered them his other parents/family; he spent a lot of quality time at their place; he considered his cousins (their children) his siblings, he referred to Albert and Russ as his brothers and Amanda and Cheryl as his sisters, his sisters-in-law, Dawn and Amanda G. The grandchildren of Sandra and Joevine were his nieces and nephews, Tristan, Kiera, Brooke, Bailey, Chase, Ryder, Shania, Robbie, Alisha, Kadence, Connor, Maddie Rose, Liam and Carson. The children have a lot of stories to share about their uncle Junior. He helped raise some of these kids as he was sometimes the babysitter when the parents were away. He jokingly played with each and every one of them. They are all grieving his loss; they have lost a child, a brother and an uncle.
Junior was predeceased by his grandparents, Joe and Sarah Beaulieu; uncles, Charles Whitford, Joe Malcolm, Stanford Eaglestick and Allan Houle; his aunts, Lydia Malcolm, Virginia Spence and Janet Houle; his cousins, George Beaulieu Jr.; Maurice Beaulieu Jr.; Dillon Beaulieu, Wilson Whitford, Joey Beaulieu, David Myerion, Cody Mousseau, Mikey Houle and Jerrod (Perrault).
Junior had a love for the Montreal Canadiens; a passion he shared with his grandfather and he passed onto his boy Storm. He also learned to fish with his grandpa. He would talk of the mornings he would sit in the boat and wait for the sun to come up. He stayed with him till his last days, taking care of him. He was not afraid of work and helped in any way he could.
He made a lot of friends on his hunting and golfing trips.
He wanted to buy a tiny house and set it up in Sandy Bay. He had bought a lot of lumber for this project. His dad was going to help.
Funeral service will be held on Thursday, September 17, 2020, at 2:00 p.m. at the residence of his late grandparents in Sandy Bay First Nation. Interment will follow at the Sandy Bay Cemetery.