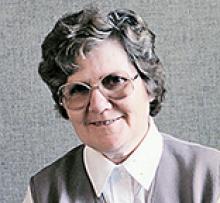 Surrounded by the love of her Grey Nun companions, Sister Yvette Nadeau went to meet her Lord and Saviour on September 25, 2020, at the age of 92.
She was predeceased by her parents, Aimé and Léa (Goulet) Nadeau, brothers and sisters: Cécile St. Vincent (Joseph); Maurice (Denise); Father Robert; Lucie; Alice Vielfaure (Rhoul); Léo; Georges omi; Annette Gosselin; Aimé and Laurette Sorin (Jules).
Besides her religious community, she leaves to mourn two sisters: Anita Bisson (Gérard) and Adèle Vermette (Claude); one brother, Denis (Colette); two sisters-in-law: Marie-Thérèse and Angela Nadeau; brother-in-law: Roland Gosselin, and many nephews and nieces.
Born on March 6, 1928, in South Junction, Manitoba, Yvette was the fourth child of a family of 14 children. At the age of three, the family moved to St. Joseph, Manitoba, where she attended school with the Sisters of the Missions. Ten years later, the family moved permanently to La Broquerie and Yvette pursued her studies with the Grey Nuns.
As a family, she was influenced by the dedication and faith of her parents as well as her teachers. At the age of 20, Yvette decided to enter the Noviciate of the Grey Nuns in St. Boniface. Two years later, she consecrated her life to the Lord through religious profession on February 15, 1951.
Following her religious profession, Sister Yvette helped as nurse's aide in the infirmary of the Grey Nuns Provincial House, later at Taché Centre and the St. Vital Sanatorium (St. Amant). From 1959, at the request of her superior, Sister Yvette was happy to accept the invitation to serve in the Northern Mission. These were: Fort Chipewyan, Fort Smith, Fort Simpson, Inuvik and Fort Providence where Sister Yvette ministered for 37 years giving the best she could at all times. She responded to various needs such as catechist, housemother for young women in boarding schools, visiting the sick and elderly and other pastoral work. As Grey Nuns, we share what was written in the Northern News Journal before she left: "Sister Yvette has a personality that is so welcoming that it was easy to get along with her, to talk to her, and she made us feel at ease. She is a good prayer support. She always made it to the homes of the elderly, the sick and the families of deceased loved ones, to pray with them and offer herself in any way."
In 1996, Sister Yvette returned to Edmonton where she continued with joy and dedication to help in various ways. Four years later, she asked to be transferred to St. Boniface, her native province.
Her health having declined, in 2007, she was transferred to Actionmarguerite (Taché Centre) where she received excellent care.
The Grey Nuns and family wish to thank the staff at Actionmarguerite (St. Boniface) 5AB and Despins Residence for their dedication, love and compassion towards Sister Yvette Nadeau.
Prayers and Mass were held by invitation only, on Sunday, September 27, 2020, at Despins Residence, 151 Despins Street, Winnipeg, MB officiated by Father Isaie Blanchette, omi.

Family and friends may sign a
book of condolence at www.desjardinsfuneralchapel.ca.