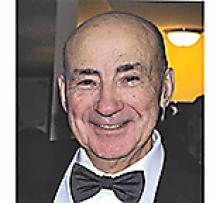 The family will be holding a private ceremony at Desjardins Funeral Home on Tuesday, October 20, 2020, at 2:00 p.m. CST.
The event will be available for livestream at:
www.livememorialservices.com/Home/ServiceDetail/6968
All are invited to virtually attend or alternately save the event for later viewing.
The family encourages everyone to share their memories of Cy on either the Desjardins website or the Free Press 'Passages' site.
Selected postings will be shared with the wider group of viewers at the virtual event.
The family wishes to thank the staffs of the St. Boniface Hospital Palliative Care Wing and Manoir de la Cathedral for their kind attention to Cy and the family over his final days.
Well wishers are requested, in lieu of flowers, to donate to 'Development and Peace' at: 1425 Rene-Levesque Blvd., West 3rd Floor, Montreal, Quebec H3G 1T7.