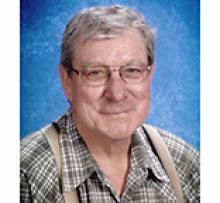 William Edward Buchanan, born December 8, 1947 in Plumas, MB to Vinton and Edna (Patterson) Buchanan, died peacefully with family by his side, on Wednesday, October 21, 2020, in Gladstone, MB, after a courageous battle with cancer.
Left to cherish his memory is his wife of 49 years, Esther (Bokor) Buchanan; daughters, Kari (Mark, son Lucas) Haakman of Winnipeg, and Lori Buchanan of Austin; sisters, Jean (Barry) Milton of Vancouver, Bea (Al) Jarvis of Pinawa, Pearl (Norman) Hogarth of Neepawa, and Laura Loomis of Gladstone; plus numerous nieces and nephews. Bill was predeceased by his parents, Vinton and Edna Buchanan; sister, Mary and her husband, Gordon Smith; brother, Norman Buchanan; brother-in-law, Ed Loomis; niece, Sheryl Loomis; mother and father-in-law, Theresa and Louis Bokor; sister-in-law, Audrey Bokor; and grandson David.
Bill was loved by many, always had an ear to listen, and ready to lend a hand when he could. He served for several years on the board of Riverside Residence, advocating for the clients. In 1972, he was awarded a Certificate of Merit from the Royal Canadian Humane Association Incorporated for helping save the lives of three men from a burning elevator in Winnipeg. Always ready to offer a beer or cup of coffee, even a meal to anyone who stopped by, he loved visiting and catching up with family and friends. He loved a good bonfire, and was always ready for a get together. Bill was a jack of all trades, working as a car jockey, on different construction projects, farming, and even earning his Electrical License in his 40s. He even tried out for the Winnipeg Blue Bombers - but only made it through one day of training camp. While working at WMCI, he was respected by staff and students alike. His grandson, Lucas, has a special place in his heart, and he will be forever known as Gramps.
Special thanks to the staff at Gladstone Hospital, Dr. Laurelyn Jiadong, and his home care workers.
In lieu of flowers, donations may be made to Central Plains Cancer Care, or Seven Regions Palliative Care.
A private burial service is planned. A Come and Go afternoon is planned for Saturday, November 7, 2020, at 36 Morris St., Gladstone, MB, from 2:00 p.m. to 5:00 p.m.