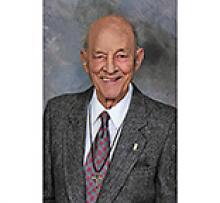 Conrad is at peace with God and his beloved wife, Evelyn, after being apart for 19 years. He was a humble man; he was simply doing what he had been called upon to do. Conrad and Evelyn discussed philanthropy before they married in 1955, and dedicated their lives to helping others. He became a mentor to many, touched lives in profound ways, and leaves behind countless precious people who loved and respected him.
Conrad is survived by his children, Conrad (Monique), Brian (Linda), Sharon (Mark), Paul (Alice), Linda (Mike); and numerous grandchildren and great-grandchildren, who fondly called him "Papa Bear". He also leaves to mourn his sister, Grace Hargrave; sisters-in-law, Hildy Wyrzykowski, Sr. Josepha Schaeffer; and brother-in-law, Edmond (Mary) Schaeffer.
Conrad has always had three priorities: his faith, family, and work. Farming was his passion; it made him feel like he was feeding the world. Mom and Dad moved the family to the country in 1978. He loved the outdoors, and was an avid duck hunter, venturing into the marsh into his late 70s. A lifelong connection to the water developed into generations of family roots at Willard Lake. After retiring from an extended career as a well-respected lawyer, he focused himself on his faith by serving his community through philanthropy and volunteerism. His whole life has been, in one way or another, dedicated to the service of others. Over the years, Conrad and Evelyn led marriage preparation, provided support for those in need, and especially single mothers. They also helped bring L'Arche to Winnipeg.

"I have had a good life and am grateful
for all that I have been blessed with."

Conrad's support of the St. Boniface Hospital was a lifelong commitment. Palliative care was an important priority for Conrad, and for years he visited patients receiving palliative care to offer a listening ear, prayers and Holy Communion. He saw many friends and other patients through their final days, and he took great joy in the comfort and peace he could bring to these people. He also provided support to the hospital in numerous ways: the Evelyn and Conrad Wyrzykowski Endowment Fund to support cancer and cardiovascular research; education and consultation room at the Bergen Cardiac Care Centre; The Wyrzykowski Family Studentship Fund to support an undergraduate student to conduct medical research; funding and establishing a palliative care room on the gynecology ward in memory of Evelyn; The Evelyn Wyrzykowski Family Research Chair in Cardiology; The Wyrzykowski Family Spiritual Care Endowment Fund, and more recently, The Wyrzykowski Family Graduate Nurse Endowment Fund. In 2017, Conrad was recognized as the profiled donor on the St. Boniface Leadership Giving Wall.
Thanks to his parents' guidance, Conrad was grateful for the Jesuit education he received, and the Ignatian influence that was imparted during his time at St. Paul's College. He applied these lessons throughout his life, and chose to recognize this impact through gifts to the college of a bursary, scholarship and Ignatian Scholars Fund. Conrad was made an honorary member of the St. Paul's Assembly, and the college dedicated a wing to Evelyn and Conrad in 2015.
In the most humble way, he truly has achieved a rich harvest.
Conrad served as founding officer and first captain HMSC Crusader Corporation of the Royal Canadian Sea Cadets, HMSC Chippawa. He was president of the University of Manitoba Students' Union; provincial, national and international delegate of the Credit Union movement in Manitoba. Conrad became an honorary member of the Missionary Oblates of Mary Immaculate in 1991. He attended the World Conference on Religion and Peace 1999 in Amman, Jordan. In 2008, he was the recipient of the Outstanding Philanthropist Award. The Catholic Foundation of Manitoba's annual dinner in 2017 was pleased to honour and recognize Conrad's work and his donation to the Wyrzykowski Family Fund.
In lieu of flowers, and in support of Conrad's lifelong dedication and commitment to making a difference in healthcare, medical research, education and spiritual advancement, donations would be greatly appreciated:
"The Evelyn Wyrzykowski Family Research Chair in Cardiology" at St. Boniface Hospital Foundation, 409 Tache Ave., Winnipeg, MB, R2H 2N6 or (204) 237-2067, "Wyrzykowski Family Ignatian Scholars Fund' in care of St. Paul's College Foundation Inc., (204) 474-9148 or CanadaHelps.org.

"God gave us all different gifts on purpose.
We have to share them to be complete.
We are all interdependent upon each other."

Family and friends may sign a book of condolence online at www.desjardinsfuneralchapel.ca.