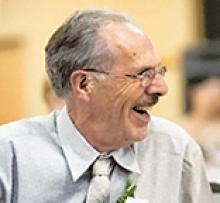 Elmer Farmer, aged 97, of Dauphin passed away on November 18, 2020 due to Covid-19.
Elmer was born May 14, 1923 near Plumas, Manitoba, the third child of Otto and Mary Anne Farmer. He married Hazel Buchanan of Gladstone in 1945. Together they raised four children.
Elmer first worked at the Gladstone Creamery as a butter maker. He won several awards for butter making from the Toronto Winter Fair. In 1949 Elmer and Hazel moved to Melita, where Elmer had secured a job with Canada Packers Creamery. In 1955 Dad took a television repair course in Winnipeg and subsequently moved to Brandon where he worked for P.A. Kennedy servicing televisions and appliances. In 1965 he was hired by Manitoba Hydro and moved to Dauphin to run the Appliance Repair Department, eventually becoming supervisor when more staff was hired. In 1983 he retired from Hydro and started Farmer's Appliance Service. A couple of years later, his son Ray took over the business and Dad worked part time until he was 70.
Elmer had many interests. He enjoyed music throughout his life, playing for dances with his brothers and sisters, and in later life with various groups for Care Homes. His earlier instruments were the mandolin and violin, and in later years he enjoyed his banjo, especially at Arizona jam sessions. His favourite recreational activity at Gilbert Plains Personal Care Home was listening to live music. Elmer also enjoyed restoring antique cars. He would enter them in parades in Dauphin and nearby towns and received many ribbons over the years. Elmer and Hazel also enjoyed travelling over the years throughout Canada, the States, and also to Europe, Australia, New Zealand and Hong Kong. One of their biggest joys was dancing together and what beautiful dancers they were! They belonged to square and round dancing groups for decades, and also enjoyed old time dances. Wintering for many years in Arizona, they went to many dances and classes, always striving for higher levels. On the gravestone that they created, it says, "Life is a Dance," which shows how important dancing was to them both.
Elmer was predeceased by his wife Hazel in 2011. He was also predeceased by his parents and all of his siblings, Archie (Clara), Fern, Irene (Lorne) Kerr, Murray (Mary), Iris (Albert) Rink, Wesley, Ivy (Keith) Charles, Kenneth and Melvin (Connie).
Left to cherish his memory are sons, Raymond (Kathy) of Dauphin, Dale (Darlene) of Carstairs, AB, Garth (Karen) of Indian Head , SK and daughter Shelby (Bill) Neill of Oakbank, as well as 11grandchildren; 19 great-grandchildren and five great-great grandchildren.
In keeping with Elmer's wishes, cremation has taken place. A private family graveside service will be held at a later date at Gladstone Cemetery.
If friends so desire, donations may be made to the Gilbert Plains Health Centre directed to the Recreation Department. The family wish to thank the staff at the Gilbert Plains Care Home who lovingly cared for Elmer in his last home.