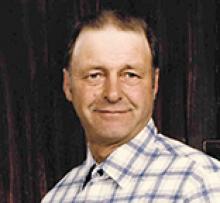 Edwin was born on June 2, 1932 in Waldersee, Manitoba to Wilhelm and Eva Single. He was confirmed in 1947 at Christ Lutheran Church in Waldersee. He grew up and farmed in the Waldersee area. In 2010, Edwin moved to an apartment in McCreary where he felt very much at home in its country setting but with its friendly town conveniences.
In June 2020 Edwin moved into the Centennial Apartments in Gladstone. He enjoyed the camaraderie of the community and was able to visit with friends. He was admitted to the Portage Hospital mid-November. He was faced with challenging medical issues and his condition deteriorated quickly. He passed away at the Portage District General Hospital on Thursday, November 26, 2020, at the age of 88 years.
Left to mourn his passing is brother Erwin (Eleanor); sisters, Beatrice and Lorraine; sister-in-law Eileen, as well as numerous nieces and nephews.
Edwin was predeceased by his parents, Wilhelm and Eva; brother Ernie; sisters, Florence (Bill Sellers), Edna (Alvin Kornelson); brothers-in-law, Herb Schmidt and Norman Rattai.
A family service will take place with interment at Waldersee Cemetery.
In lieu of flowers, donations may be made to Christ Lutheran Church, Waldersee.