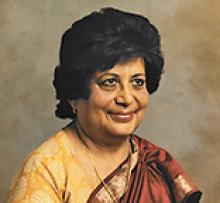 Ruby was born in India. She was the fifth of six children. Her father was an Anglican minister and her mother was a school principal. She attended Christian schools and after high school graduation, she was trained to be a teacher. After her marriage to Aftab Khan, they immigrated to England, and in 1968 Ruby came to Winnipeg. In Winnipeg Ruby continued her studies at the University of Manitoba, and graduated with a Masters of Education degree.
Her husband Aftab died in 1977. Thereafter Ruby stayed and lived with her sister's family in Winnipeg, where she helped raise her niece Anjali and nephew Michael. Anjali and Michael referred to her lovingly as Maunty (mom and aunt combined).
Ruby taught Sunday school at Church of the Way for many years. She also did some volunteer teaching at the International Centre, where she taught English to immigrants. Occasionally she also taught evening classes of the Hindi language at the University of Manitoba.
Since 2012, Ruby stayed in the Convalescent Home of Winnipeg Personal Care Home, where she was lovingly taken care of until her passing.
Ruby is predeceased by her husband Aftab; sisters, Rose, Letti; brothers, Freddie and Patrick; and her youngest sister Shirin.
Ruby is survived by her brother-in-law Eduard Schludermann; nephew Bushan (Esther) Titus and their children; nephew Michael; niece Anjali (Mark); great-nephews, Andrew (Kiana, great-great-nephew Zayden), Anthony, and Ian; as well as many other nieces and nephews in India.
A private family interment will be taking place. A memorial service will take place at a later date.
The family wishes to thank the Convalescent Home of Winnipeg for all the love, care and support through the years.

Family and friends may sign a
book of condolence online at www.desjardinsfuneralchapel.ca.