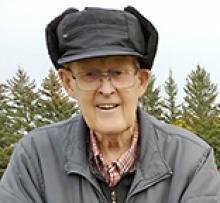 With his family by his side, Elvin peacefully passed away at Steinbach Bethesda Hospital and was ushered into glory to meet Jesus on the morning of December 12, 2020.
The oldest of five siblings, Elvin was born on April 5, 1940, to Mr. and Mrs. Ben and Elizabeth Reimer.
He is survived by his wife Anne, son Larry (Neth); grandchildren: Ashley (Zach), Kya and Matthew; and one sister, Helen.
Elvin was predeceased by both his parents, his daughter-in-law Nelia 2006, three brothers: Ben Reimer (2009), Abe Reimer (2011), and Joe Reimer (2017), as well as his daughter, Virginia Courtnage in 2015.
Elvin was born in Blumenort. When he was eight years old, they moved to Mexico where they stayed for five years in Quellan Colony.
When Elvin was 13, they moved back to Canada when, not long after that, Elvin's father bought a farm in Kleefeld for the boys. Over the next few years, Elvin's father was plagued with multiple strokes and eventually died at the young age of 46. Elvin was only 16 at the time, and became the sole bread winner for his mother along with all his siblings. He spent time working at the New Bothwell Cheese Factory as well as two winters in a bush camp. That experience would help mould him into a hard-working young man and taught him a valuable work ethic that he would carry with him for the rest of his life.
With all the moving back and forth, Elvin was only able to complete a grade two education.
During the time when his father was in and out of the hospital with his strokes, Elvin fancied a young girl his age in the Kleefeld EMC church. One day he gathered all his courage and went to her house to ask her father if his daughter would possibly go for a ride with him in his car. Luckily, her father agreed but the first question out of her mouth to Elvin was "are you a Christian?" to which he replied yes. A year and half later on September 1, they were married and celebrated 59 years of marriage.
In 1960, Elvin applied at Steinbach Hatchery and Feed and gave them 55 years of loyal dedicated service. During his tenure at Steinbach Hatchery and Feed, he struggled at first with only a 2nd grade education but rose through the ranks by becoming farm manager to one of the highest grossing chick salesmen. He was also Chair of the Manitoba Hatchery Association. His honesty and integrity won him many repeat customers. During his time as farm manager, he employed many young teens with their first job who later became successful men in the community.
He was also given the opportunity to be educated in poultry science and became adept at diagnosing behavioral and internal problems of chickens. Any flocks he was in charge of or supervised never knew how good they had it!
In 1991, he and Anne with their daughter Virginia travelled to South Africa to visit his missionary brother Joe. That was a trip of a lifetime.
Elvin loved watching hockey. He spent many evenings watching Hockey Night in Canada, but nothing compared to watching his grandson playing hockey. Oh how he loved it! His presence will be sorely missed.
Elvin was a devoted father, and husband but above all a deeply devoted Christian man. His number one priority was that his children know the Lord. He lived what he preached. He gave to the poor and led many people to the Lord. He was a man of his word. When he said "I'll take care of it" you knew he meant it.
Dad you were my rock and your wisdom carried me through many trials. I long for the day we can meet again in a place where your frail and diseased body knows no limits.
We would like to thank Bethesda Hospital staff for their countless hours of dedicated care for Elvin.

I have fought the good fight I have finished the race. I have kept the faith.
Now there is in store for me the crown of righteousness which the Lord the righteous judge
will award to me on that day and not only to me but also to all who have longed for his appearing.

The viewing for Elvin Reimer will be held on Friday, December 18, 2020, from 7:00 p.m. to 9:00 p.m. at Birchwood Funeral Chapel, Steinbach, MB. Due to Covid restrictions only five people may enter at a time and social distancing protocols along with masks are still mandatory. Please remain inside your vehicle until directed.
The livestreamed private family service will be held on Saturday, December 19, 2020 at 2:00 p.m. at Birchwood Funeral Chapel, Steinbach, MB.
To join the family via livestream, please visit the link in Elvin's obituary on birchwoodfuneralchapel.com shortly before the time of the service.