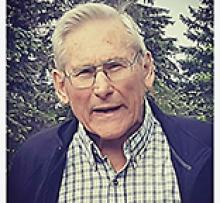 It is with great sadness, but relieved that he is home for Christmas, we announce the passing of Paul (Paulus) Vanderwoude at the age of 91. Loving father, pake, and great-pake, who peacefully passed away at his friends' place, with them by his side.
He will lovingly be missed by his children: Peter (Laurie) Vanderwoude, Joy (Dave) Boyko, Lorne (Gwen) Vanderwoude, and Deneena (Paul) Hughes. Grandchildren: Amber and Brooke John, James (Milissa), Daniel (Chantelle) Peter, Grace, Anthony, Michael, Gabriella, Kate, Kennedy (Logan), Georgia, Brett and Sophia and great-granddaughter Flora; his sister Djoke and all his nieces, nephews and their families in the Netherlands; his sister-in-law Sybil Williams, brother and sister-in-law Morris and Gwen Heffel and his nieces, nephews and their families in Canada as well as many friends all over the world.
Paul grew up in the Netherlands. He immigrated to Canada just before his 23rd birthday. He held many jobs including farming, construction, and wrestling.
He faithfully served as a municipal police officer for 32 years. He loved travelling and meeting people. Paul was not afraid to share his faith and his opinions.
Paul was predeceased by his first wife Flora E. Heffel, his second wife Margaret Plett and his third wife Lillian Thiessen, and three brothers.
Special thanks to Anna and George Braun, and Janneke and Ronald Hamstra and their children, who lovingly took care of him until his passing.
Cremation has taken place and a Celebration of Life at a later date.
Ash interment for Paul Vanderwoude will be at Sedgewick Cemetery, AB.